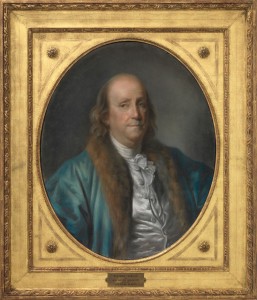 Portrait of Benjamin Franklin by Jean-Baptiste Greuze, circa 1777.  Photo courtesy of the Diplomatic Reception Rooms, U.S. Department of State.

The list of Benjamin Franklin’s accomplishments and aphorisms is long, storied and impossible to condense effectively in one short film, book or review. But Award-winning filmmaker Ken Burns has successfully managed to corral and explore many facets of this extraordinary American in his new, two-part, four hour PBS documentary, Benjamin Franklin.

Benjamin Franklin’s distinguished literary, scientific and political career spanned almost the entire 18th century.  His journey from Puritan youth to Enlightened adult and international celebrity was rich with color, humor and life experience that he relished and shared in his many published tomes.

“There are three things extremely hard–steel, a diamond, and to know thyself.”–Benjamin Franklin.

From beginning to end, his life was a work-in-progress.  He never lost his drive to master new skills, satisfy his intellectual and scientific curiosity and his quest to improve the daily lives of others.  He launched the public library and a voluntary fire company, founded a college that would become the University of Pennsylvania, invented the Franklin stove, bifocal glasses and an ingenious musical instrument called the armonica.  He harnessed lightening and defined its electrical properties… and that was just the tip of the iceberg.

Franklin was also a man of many contradictions.  He was a slave owner who came late to Abolition.  His beloved wife, children and brother bore the emotional scars of his wanderlust, spurred by his insatiable entrepreneurial spirit, thirst for educational and scientific pursuits, and seduction by the old world charm and the ladies of London and Paris.

“He that falls in love with himself will have no rivals.”–Benjamin Franklin.

By the time he reached old age, he had studied, written, invented and absorbed enough to change the face of the American colonies for the better.  And when he realized that colonial life under the thumb of the English monarchy was untenable, Franklin was reborn an American patriot.

A view of the town of Concord, Mass., by Amos Doolittle, 1775. Photo courtesy The New York Public Library.

His shrewd diplomatic skills turned the tide during our war for independence,  assuring the success of our troops–who were outnumbered, lacked sufficient uniforms and weaponry–by successfully negotiating French intervention and monetary support.  He laid the groundwork for our final break from the British Empire, helped draft and sign off on the Declaration of Independence and U.S. Constitution, thereby solidifying “our more perfect union” and our democracy. 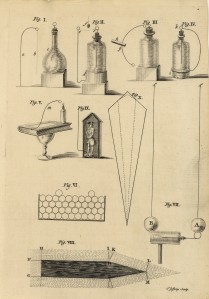 Some of Franklin’s drawings from his “Experiments and Observations on Electricity,” circa 1751. Photo courtesy the John Carter Brown Library.

On the surface, Benjamin Franklin fits the bill as a content rich Ken Burns documentary about an extraordinary American from a bygone era whose writings, inventions, scientific discoveries and visionary talent as a nation builder played a major role in the creation of life as we now know it in the USA.  But it is much more than that.

Burns has never made lazy choices.  Now, more than ever, they are driven by his passion to illuminate and inspire the better angels of our nature and nation.  It is time to revisit the American Revolution, and how clever to do it from the perspective of a key player.

In the current national and international political climate, clouded by Trump and Putin, the film reminds us that the freedoms we take for granted were not easily won and the Constitution that defines our democracy was not easily sealed. The parallels with the brave Ukrainian patriots’ fight to save their independence and democracy are crystal clear.

During an interlude following the U.S. Constitution’s adoption, Franklin’s neighbor Elizabeth Willing Powel reportedly asked, “What have we got, a republic or a monarchy?” “A republic,” Franklin responded. “If you can keep it.”

Let Ben Franklin then and the Ukrainians now inspire us to continue to defend and protect our most valuable asset: our U.S. Constitution.