They may have been miscast in the movies, but, in real life, they’re smart, social and sassy! See why in OCTOPUS: MAKING CONTACT on PBS NATURE and MY OCTOPUS TEACHER on Netflix. Photo ©Minden Pictures/Alamy Stock Photo.

“What would I find out if I invited an octopus into my home?” —Professor David Scheel, Alaska Pacific University.

Dr. David Scheel asked himself that question after spending more than two decades studying rare octopus species in remote regions around the world.  So the marine biologist decided that the time was right to move his work to a more hospitable environment closer to home… his living room.

Dr. Scheel’s unorthodox plan to observe an octopus up close and personal is documented in Octopus: Making Contact, a fascinating 2019 film set for rebroadcast on PBS NATURE tonight, Wednesday, January 12, 2022, 8:00 – 9:00 p.m. ET.  Check local listings for air times and repeat broadcasts in your region; and http://www.pbs.org/nature and the PBS Video app for streaming info; and http://ShopPBS.org for DVD and Blu-Ray availability.

If, like me, you’ve been known to grimace or cringe at the sight of an octopus and its eight suckered tentacles in aquariums or at fine dining establishments, I encourage you to give the creature a second chance.  I guarantee that after viewing Octopus: Making Contact and the Academy Award®-winning feature-length documentary, My Octopus Teacher, also covered in this review, you’ll never regard octopuses with a cringe or a grimace again… or, it turns out, you may hurt their feelings!

Octopus: Making Contact, directed by Emmy® Award-winner Anna Fitch, has a lot to say about the sea animal’s built-in wow factor.  With the blessing of his 16-year-old daughter, Laurel, Dr. Scheel introduced a female day octopus into a large salt water tank situated in their Anchorage, Alaska, living room.  The Scheels named their new “pet,” Heidi, because she, like all octopuses, was a talented escape artist that could disappear into the tiniest cracks and crevices or creative camouflage at whim.

Heidi proved to be a quick study and a surprisingly social addition to the Scheel household.  Heidi engaged physically and emotionally with the Scheels as they fed and played with her.  She was clearly excited to see them come through the front door, which was visible from the tank as was the family’s TV, which Heidi watched over Laurel’s shoulder.

There was little that Heidi didn’t miss or respond to.  Heidi’s curiosity and lack of shyness when it came to interacting with the Scheels enabled them to experience her transformative physical beauty and agility, extraordinary intelligence and problem-solving and social skills firsthand from a front row seat in their living room.

“Octopuses followed a different evolutionary path than other intelligent animals on this planet,” said Dr. Scheel in retrospect. “I’m less intrigued by the differences and more interested in our similarities.  It’s been a privilege to have a relationship with such a strange and wonderful creature.”

Once you’ve been charmed by the film’s offbeat premise and outstanding cinematography, the latter a refreshing trademark of films produced for the PBS NATURE series, I highly recommend that you follow Octopus: Making Contact with a screening of the 2021 Oscar®-winning Best Feature Documentary, My Octopus Teacher, now available for streaming via its co-producer Netflix.  But be forewarned:  Keep a box of Kleenex handy!

With its breathtaking cinematography, evocative music and insightful narration by the film’s human protagonist, filmmaker Craig Foster, My Octopus Teacher is worth every film award, critical accolade and audience huzzah it generated during its original theatrical release in late 2020.  It’s an exploration of one man’s remarkable relationship with a young octopus in her own turf… a mystical kelp forest along the Cape Town coastline in South Africa.

The 85-minute chronicle of Craig Foster’s life-altering return to the kelp forest that he enjoyed exploring as a youngster was stunningly filmed by avid divers Pippa Ehrlich, Roger Horrocks and Foster himself.  Numbed by career burnout and malaise, his restorative daily dives would soon center on one solitary female octopus whose life story literally played out in front of his eyes, ears and camera lens.

“Unknowingly, I had met the greatest teacher of my life, a young female common octopus, Octopus vulgaris,” recalled Craig Foster. “I visited her den every day for weeks.  After a few months, she gradually realized that I posed no threat, and she began to trust me.  I was allowed into her wild inner world and felt as though an ancient door to nature had been opened to me.”

As Foster’s year-long journey to enlightenment unfolds in the Great African Seaforest, we are witness to the blossoming bond that develops between Foster and his resilient, brave, inquisitive, tender and, above all, super intelligent octopus pal. The film documents her savvy ability to trap her prey, dodge predators, cope with fear and physical trauma, mate, and creatively contort and camouflage her boneless body and change the color and texture of her skin to match her surroundings. 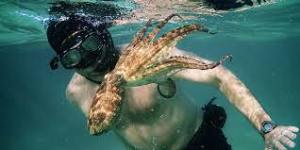 Craig Foster’s octopus pal shows him around her neighborhood in MY OCTOPUS TEACHER. Photo courtesy Netflix.

“I started to wonder how octopuses experience time,” said Foster.  “Their time is not like ours; one of her months is equivalent to almost five years of my life.  Each moment spent with her as she guided me around our forest was deeply precious to me.”

My Octopus Teacher is chockablock with awe-inspiring beauty, drama, suspense and heart-tugging emotion.  I can’t imagine anyone not being moved when the octopus reaches out to connect with Foster, at first with a tentative tentacle, then a playful snatch of his camera, and finally with a full body hug.  Her magnificence changed Foster’s life forever.

“She was teaching me to become sensitized to the other, especially wild creatures,” reflected Foster.  “That connection with an animal is absolutely mind blowing.  The boundaries seemed to dissolve.”

My Octopus Teacher is a must-see film about one of my favorite topics… our connection to every living being on this planet, and our responsibility to respect and treasure their singular attributes and protect their habitats, even if they live and look differently than we do.

MY OCTOPUS TEACHER was filmed in the Great African Seaforest, a giant underwater forest that fringes the shores of Cape Town. Photo courtesy The Sea Change Project.

“I think what’s powerful about the film is that there’s this big South African guy who is telling a deeply intimate story about an animal that is essentially a modified snail,” said co-director Pippa Ehrlich. “He takes us into this fragile creature’s world, and she transforms from an underwater alien into a protagonist that we can really relate to and care about.”

My Octopus Teacher is available for streaming from Netflix, which also offers subscribers the opportunity to host educational community screenings free-of-cost.  Check out the the Sea Change Project Website @ http://www.seachangeproject.com to find out more about the Netflix offer and the film’s supplemental discussion guide. The Sea Change Project was co-founded by the team responsible for My Octopus Teacher and is a collective of filmmakers, journalists, and scientists working to protect the Great African Seaforest and study and film the lives of kelp forest animals. –Judith Trojan