Zelenskyy: The Man Who Took on Putin Debuts on PBS

“They will not break us.”–Ukrainian President Volodymyr Zelenskyy. 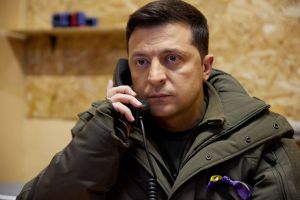 If, like me, you’ve been anxious to find out more about the courageous Ukrainian president who, in just a few short weeks, has touched the hearts and minds of freedom lovers the world over, Zelenskyy: The Man Who Took on Putin is a great place to start.  The new half-hour documentary debuting on PBS tonight, March 18, 2022, 10:30 – 11:00 p.m./ET is just the ticket. (Check local listings for air dates in your region and below for complete details.)

Produced and directed by Daniel Smith and Laura Stevens for ITN Productions, Zelenskyy: The Man Who Took on Putin charts Zelenskyy’s meteoric rise from zany comic and sitcom star to bold wartime leader.  Born into a Jewish Russian-speaking family whose relatives survived the Holocaust, Zelenskyy completed a law degree but was drawn instead to showbiz.

From improv comedy star, winner of Dancing with the Stars and voice of Paddington Bear to his prescient sitcom starring role in Servant of the People (he played a history teacher who became the unlikely president of Ukraine!), Zelenskyy went on to tackle a more impressive role on the largest stage of all.  He ran for that office in real life.

The film explores Zelenskyy’s game-changing use of social media and television to win the election in a landslide and captivate the freedom-loving world with his country’s determination to fight the good fight. 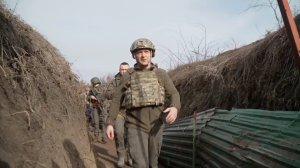 As we watch the horrific war crimes unfolding daily in Ukraine and relish the defiant response of a country under siege, it’s especially inspiring and even  comforting to witness the rise of a remarkable and unlikely leader at a time when his countrymen and women need him most.  Like Washington, Lincoln, Roosevelt and Churchill before him, Zelenskky seems destined to change the course of history for the better.

What motivates Zelenskyy?  And how did he transform from a TV personality to become a major figure on the international stage?  No doubt, longer documentaries will be filmed and books will be written to answer those questions more fully.  But Zelenskyy: The Man Who Took on Putin, with its concise biographic and geopolitical introduction to Zelenskyy and Ukraine, respectively, ably contextualized by a handful of articulate historians and scholars, provides a worthy starting point to begin the discussion.

Zelenskyy: The Man Who Took on Putin premieres on PBS tonight, Friday, March 18, 2022, 10:30-11:00 p.m./ET.  Check local listings for air times and repeat broadcasts in your region and its availability on PBS.org and streaming via the PBS Video App.  Episodes of Servant of the People are, at this writing, streaming on Netflix. –Judith Trojan

Judith Trojan is an Award-winning journalist who has written and edited several thousand film and TV reviews and celebrity profiles.
View all posts by Judith Trojan →
This entry was posted in Film, Politics, TV and tagged Daniel Smith, Laura Stevens, PBS, Russia, Servant of the People, Ukraine, War, World History, Zelenskyy The Man Who Took on Putin. Bookmark the permalink.

1 Response to Zelenskyy: The Man Who Took on Putin Debuts on PBS