“I remain your New York corespondent Walter Winchell, who can sit at his window and review those passing below.  He sees everyone he likes… or doesn’t. He can either drop a flower… or a flower pot.”–Walter Winchell.

If names like Hannity and Limbaugh, Maddow and Cooper raise your hackles or float your boat, their talent to make or break news and newsmakers pales in comparison to the power wielded in the 1930s, ’40s and ’50s by syndicated newspaper columnist, radio news commentator and TV host Walter Winchell.

The story of Winchell’s meteoric rise, colorful beat and tragic fall from grace make for a fascinating new installment of the PBS American Masters series. Walter Winchell: The Power of Gossip debuts on PBS tonight, Tuesday, October 20, 2020, 9:00 – 10:00 p.m. ET.  (Check local listings for air times in your region, http://pbs.org/americanmasters and the PBS Video app for streaming, and http://ShopPBS.org for DVD availability.)  I urge you not to miss it!

Walter Winchell was the first media pundit to tweak entertainment and celebrity news and gossip with politically charged commentary. His talent to tap into the zeitgeist of mid-century America via the nascent tabloid newspaper, radio and TV markets gave him the edge… and his audience listened. 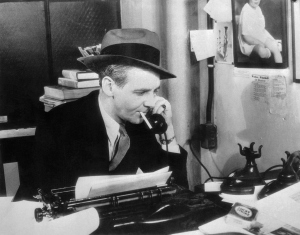 At his peak, Winchell took no prisoners as he transfixed 50 million Americans with his distinctive voice on radio and in newsprint, in communiqués freshly peppered with his own personally concocted “slanguage.”

“Hollywood is where they shoot too many pictures and not enough actors,” snapped Winchell.

The denizens of the Great White Way were also an easy target for Winchell, safely perched at his celebrity-filled corner table in the famed Stork Club. “Broadway is a main artery of New York life –the hardened artery,” cracked Winchell without missing a beat.

Born in Harlem in 1897, Walter Winchell hit the vaudeville circuit as a mediocre singer and dancer where he made two life-changing discoveries: He met his first wife, who gifted him with a typewriter; and he found that he was a better backstage gossip than performer.

By the mid-1920s, the only thing he was tapping on was the typewriter.  Winchell caught the attention of The New York Evening Graphic, a tabloid rag that gave him the chance to turn his gift for gossip into a paying gig.  He found his niche; and New York night crawlers, show biz stars and wannabes and Park Avenue swells became his unwitting subjects. He had a knack for knocking down the mighty with sly innuendo, suggesting much in his colorful brand of “Winchellese.” “She’s been on more laps than a napkin,” he opined.

Wider exposure on The New York Daily Mirror and national syndication, as well as his immensely popular radio broadcast kept “Mr. and Mrs. America and all the Ships at Sea” entertained with news of the rich and famous during the Great Depression and beyond.

Walter Winchell reported from the courthouse in Flemington, NJ, during the 1935 Lindbergh baby kidnapping and murder “Trial of the Century.”

No one was sacred, not even American aviation hero Charles Lindbergh. Winchell reported directly from the Flemington, NJ, courthouse during the 1935 “Trial of the Century,” that convicted the Lindbergh baby’s purported kidnapper and murderer. But, when Winchell, the son of Polish Jewish immigrants, sounded early alarms about the rise of Hitler in Germany and parallel expansion of Nazi activity in the U.S. (youth camps and rallies), he made sure to single out notable Nazi sympathizers as well, including Charles Lindbergh.

Winchell was no Walter Cronkite or Edward R. Murrow.  Serious journalism was not his forte, but Winchell did have powerful political connections that he respected, for better (President Franklin D. Roosevelt and FBI Director J. Edgar Hoover) or worse (anti-Communist witch hunter Senator Joseph McCarthy and his henchman, Roy Cohn). Winchell relished partnering with FDR to promote the New Deal and our entry into WWII.  And Winchell supported J. Edgar Hoover’s efforts to expose American Nazi sympathizers.

But Winchell’s anti-Communist leanings led him to tout McCarthyism in the 1950s.  This ill-fated alliance, as well as a failed stint as a TV host in the mid-Fifties and celebrated rows with African-American performer and activist Josephine Baker and popular TV host and Broadway columnist Ed Sullivan, led to Winchell’s downfall.

Walter Winchell: The Power of Gossip paints a valuable picture of Winchell’s enormous influence as a media superstar. Emmy Award-winning filmmaker Ben Loeterman turns a fresh eye on Winchell’s career and the American cultural and political landscape that enabled him to rise and prosper, and eventually fall.

Writer/producer/director Ben Loeterman masterfully incorporates a fascinating collection of vintage archival footage, audio and photos (the Lindbergh, American Nazi party and Josephine Baker segments are especially gripping).  Sharply focused anecdotes from period historians (most especially Winchell biographer Neal Gabler); spot-on Winchell reenactments voiced by actor Stanley Tucci; and unobtrustive voice over narration by Whoopi Goldberg round out this riveting documentary that will grab you from its 1952 “What’s My Line” opener and never let you go.

Walter Winchell: the Power of Gossip is one of the most timely films in THIRTEEN’s American Masters’ series for WNET to come along in recent memory.  It will be an evergreen asset to programming in schools, libraries and universities covering the good, the bad and, yes, the ugly roots of modern media and superstar pundits.  I also recommend it as the perfect complement to HBO’s recent outstanding adaptation of Philip Roth’s novel, The Plot Against America, in which Walter Winchell and Charles Lindbergh drive much of the narrative.

American Masters–Walter Winchell: The Power of Gossip debuts on PBS tonight, Tuesday, October 20, 2020, 9:00 – 10:00 p.m. ET.   (Check local listings for air times in your region, http://pbs.org/americanmasters and the PBS Video app for streaming, and http://ShopPBS.org for DVD availability.) The Plot Against America miniseries is available on HBO On Demand and to stream on HBO Max. –Judith Trojan

5 Responses to Walter Winchell: The Power of Gossip Makes Timely Debut on PBS