“Did you see the way our people, you know, they were protecting his bus yesterday, because they’re nice. They had hundreds of cars…You see Trump and the American flag.” –President Donald J. Trump.

Excuse me?  Nearly 100 trucks festooned with Trump campaign gear dangerously menaced a Biden/Harris campaign bus on heavily trafficked Texas Interstate 35 on Friday, November 2, 2020.  The incident, now reportedly under Federal investigation, resulted in at least one accident and the cancellation of two planned Biden campaign rallies out of fear for staffers’ and supporters’ safety.

Contradicting critics and encouraging investigators to look elsewhere, Trump tweeted: “In my opinion, these patriots did nothing wrong.”  A local female Texas GOP stalwart gave the incident a similar thumbs up, tweeting: “We sent the [Biden campaign] bus out of Hays [Texas]! Your kind aren’t welcome here! This is TrumpCountry.”

Has Election 2020 time-travelled back to the 1960s when violent intimidation of opposing candidates and minority voters in certain regions of the country was the norm?  Where the heck are we living, and how have we sunk so low?

This shocking behavior immediately triggered my memory and review of Stanley Nelson’s powerful Peabody Award-winning 2014 documentary, Freedom Summer.  The film is a poignant reminder that a mere five decades ago voting was virtually off-limits to Mississippi’s African-American community.  It was a time when attempts to correct that injustice incited menacing caravans of local “good people” who wore white hoods and capes, burned crosses on people’s lawns and beat, raped and murdered not only American citizens who attempted to vote but also those who campaigned and worked to expedite the fair and equal process.

By turns troubling and uplifting, the film continues to stand as a timely reminder that systemic racism can be eradicated when blacks and whites work together to implement change. Freedom Summer debuted on the PBS series American Experience in June 2014 and, Good News!… you can at watch it for free @ http://pbs.org/wgbh/americanexperience/collections/civil-rights/ Freedom Summer bears revisiting.

Contrived literacy tests and threats of home and job loss, violence and death were the tactics used by the segregationist white establishment to bully black Mississippians out of the polls and elected office.  As the summer of 1964 dawned, only 6.7% of African-Americans were registered to vote in Mississippi, in contrast to 50-70% in other Southern states.  While African-Americans made up the majority of the population in rural Mississippi, they remained frozen in time–tipping their hats and bowing their heads as their white neighbors strolled by.

Somehow, Mississippi had fallen off the radar and remained the land that time and the rest of America forgot.  Until, that is, the Mississippi Summer Project aka “Freedom Summer” was launched by the Student Nonviolent Coordinating Committee (SNCC) to transport almost 1,000 white and black student volunteers down from the North for 10 weeks to aid local civil rights activists in their efforts to register black voters.

Filmmaker Stanley Nelson clearly sets the stage on which these idealistic young Northerners (average age 19-20) found themselves. Mississippi was in the grip of the Citizens’ Council, who answered any perceived threat to white supremacy with violence. Early casualties were Mickey Schwerner, Andrew Goodman and James Chaney, who disappeared en route to investigate a church bombing. Their bodies were later found buried in shallow graves.  The summer played out with beatings, the burning of 35 churches and bombing of 70 homes and community centers. 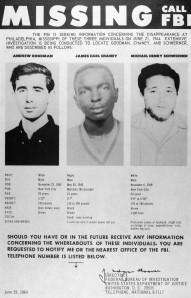 The film seamlessly integrates well-chosen period archival and news footage, photos and letters with articulate recollections by surviving volunteers, organizers and civil rights leaders who reflect on what they faced, how they survived the ever-present fear of being shot, tortured, raped or killed and what they garnered from their commitment.  Their stories are often chilling.

Standout witnesses here are the women who departed states like Iowa, New York and Vermont as fervent but naive young volunteers, as well as the locals who opened up their homes to them at great personal risk to themselves and their families (African-Americans housing white young women were especial targets).  Anthony Harris, then a youngster and now a Ph.D., is a particularly engaging witness.  He attended a life-altering Freedom School set up by the volunteers to introduce young African-American Mississippians to literature (blacks were barred from local libraries) and to the black history and culture they were sorely missing.

Two fearless women posed a special problem for President Lyndon Baines Johnson, who opposed the black voter registration drive in Mississippi, afraid it would cost him the next election. 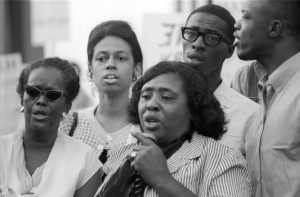 Fannie Lou Hamer, a sharecropper and SNCC field secretary, passionately supported unseating the all-white Mississippi delegation at the Democratic National Convention in Atlantic City.  And Rita Schwerner, a Freedom Summer organizer and the young widow of Mickey Schwerner, worked relentlessly to keep her husband’s loss and memory alive in the public eye.

The film includes snippets from what appear to be Oval Office phone conversations, including those between President Johnson and F.B.I. Director J. Edgar Hoover, that are pretty damning, as are the backdoor machinations used by LBJ to stifle the Mississippi Freedom delegates at the National Democratic Convention.

But LBJ’s determination to sign the Voting Rights Act of 1965, a monumental piece of legislation abolishing literacy tests and protecting voter rights in the seven Southern states, positions him irrevocably on the right side of Civil Rights history.

The Voting Rights Act of 1965, a direct result of the volunteers’ daunting efforts during the summer of 1964, can’t be understated, nor can the importance of Stanley Nelson’s film, Freedom Summer, as a reminder of a time when a long hot summer brought courageous young people of both races together, in a climate of fear and violence, to make a difference.

As we await the final outcome of Presidential Election 2020, it behooves us not to regress to a time when politically condoned and regionally orchestrated menace and outright violence stifled voters’ rights and campaign safety.

Be sure to revisit Stanley Nelson’s 2014 two-hour documentary, Freedom Summer, via the PBS American Experience Website  http://pbs.org/wgbh/americanexperience/collections/civil-rights/ and stand firmly and forever with the better angels of our Nation’s history and #Vote !–Judith Trojan