Weiner The Man, The Myth, The Documentary Makes Its Showtime Debut 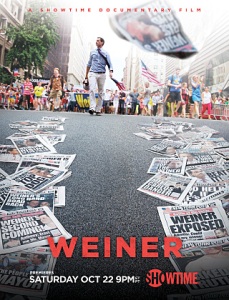 “I did a dumb thing. But I did a lot of other things too,” says former New York Congressman and New York City Mayoral candidate, Anthony Weiner.

That’s quite an understatement, given the actual “dumb thing” that imploded Anthony Weiner’s promising political career and marriage. Lots of us do dumb things, but few cause as much collateral damage and media “noise” as Weiner’s obsession with sexting.  If you’ve managed to weather the current contentious Presidential campaign and its unsavory revelations, you’re probably well-equipped to watch Weiner, the feature-length length documentary by Josh Kriegman and Elyse Steinberg making its world television premiere on SHOWTIME tonight, October 22, 2016, 9:00 -10:30 p.m. ET/PT.  (Check listings for repeat broadcasts in the weeks ahead and availability On Demand.)

Anthony Weiner hit the ground running in New York City politics. In 1992, he became the youngest member of the New York City Council and went on to win seven terms in the U.S. Congress (D-NY). He served through 2011, when he departed his post in disgrace. The film opens with clips of his scrappy, take-no-prisoners posturing in Washington, as he fought for health care for 911 first responders, and is peppered with clips of him schmoozing his remarkably forgiving middle-class constituents on the streets of New York.

Anthony Weiner took to the streets of NYC to rebuild his political career. As seen in the documentary, WEINER. Photo courtesy of SHOWTIME.

Caught sexting during his Congressional stint, Weiner resigned and the media pounced. He managed to defuse the mistrust that followed his lies about the incident and somehow deflected concern about the character flaws that led him to unzip on the Internet.  He patched up his marriage to his accomplished young wife, Huma Abedin, a trusted advisor of Hillary Clinton, and forged ahead with a desperate attempt to become the Democratic candidate for Mayor of New York City in 2013.

The film brilliantly chronicles Weiner’s downhill race to the finish line. New Yorkers are a tough but forgiving breed.  In contrast to the tabloid media, late-night comics and political pundits who never loosened their grip on Weiner or his staff and family, Weiner’s constituents initially seemed anxious to move beyond his first sexting misstep and concentrate on the issues they knew he would champion.

But after building a staff of young, dedicated campaign professionals and volunteers and rebuilding his marriage, Weiner was outed again and forced to admit to additional sexting escapades. To make matters worse, a young, sexting paramour soon came out of the shadows to share his spotlight during the final days of his campaign and claim her own 15 minutes of media fame. 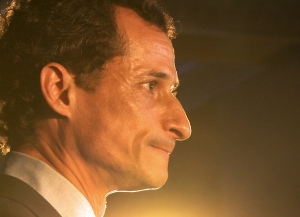 Anthony Weiner runs on empty by election day. From the documentary, WEINER. Photo courtesy of SHOWTIME.

By the end of the film, we watch a badly beaten and desperate Anthony Weiner as he taps every last humiliating ploy to salvage his losing campaign.  His once dedicated staff and energized, trusting wife are bathed in a cloud of gloom…all distancing themselves from this wreck of a man.  The only bright spot in his life, his toddler son Jordan Zain, becomes Weiner’s last and most sickening victim. Without wife Huma at his side at the polls, he steps into the voting booth on election day with his son in his arms…the boy screaming in fear at the barrage of hovering media vultures and cameras flashing in his face.

With their inclusion of Weiner’s intimate interactions with his staff and his family, filmmakers Josh Kriegman and Elyse Steinberg provide an important if painful look at the toll Weiner’s indiscretions take on his young campaign advisors and especially his wife. Huma’s initial attempts to make the marriage work and her husband’s political dreams come true should be a revelation for those who condemn, across the board, the decisions of political spouses who stand by their men.

Weiner is a remarkable if difficult film to watch.  It brings us up close and personal to a clueless, arrogant individual who, by diverting attention from the tragic flaws in his character (he never really addresses them in the film), subverts the very qualities we treasure most in a viable candidate for higher office…honesty and trustworthiness, strong family and employer values, selfless resilience, a fighting spirit and respect for the rights of others.

Weiner makes its world television premiere on SHOWTIME tonight, October 22, 2016, 9:00 -10:30 p.m. ET/PT.  (Check listings for repeat broadcasts in the weeks ahead and availability On Demand.)  You’ll be riveted; but by film’s end, you’ll be in the mood for a swig or two of Pepto Bismol…or something even stronger.–Judith Trojan

3 Responses to Weiner The Man, The Myth, The Documentary Makes Its Showtime Debut