In May 2013, women’s rights activist Ye Haiyan held up a sign in protest against an elementary school principal and a government official accused of raping six female students, ages 11 to 14, in Wanning City, Hainan Province, China. The back story is documented in HOOLIGAN SPARROW on PBS. Photo courtesy POV Digital.

Born and raised in a rural village in China, Nanfu Wang’s subject, Ye Haiyan, has spent much of her adult life dodging reprisal as a women’s rights activist. She’s chosen to travel a difficult path, especially as a single mom living in a country where free speech and dissent are one-way tickets to government-sponsored surveillance, detention, kidnapping and threats of physical violence.

Ye Haiyan is also known as “Hooligan Sparrow” to her many followers on the Internet, who have witnessed from afar her attempts to raise awareness of the plight of sex workers in China.  To make her point, Ye Haiyan even joined their ranks as a “free sex worker” at a local brothel. Her most recent crusade was filmed surreptitiously by the equally persistent and gutsy Chinese national, Nanfu Wang, who now lives in New York City.  Her 90-minute documentary, Hooligan Sparrow, makes its broadcast debut on the PBS series, POV, tonight, Monday, October 17, 2016, 10:00 – 11:30 p.m. ET.  (Check listings in your region for air times and repeat broadcasts.) 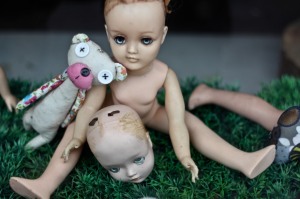 One of Ye Haiyan’s most recent risky endeavors involved her drive to bring worldwide attention to the case of six Chinese primary school girls, ages 11 to 14, who were abducted in 2013 by their school principal and sexually assaulted by him and a government official in a hotel room over a 24-hour period.  Despite clear evidence of their guilt (the girls’ disappearance from school, their vivid testimony and bloody proof of their assault), the alleged perpetrators initially escaped punishment, declaring the girls to be prostitutes and fair game.

Secret police surveillance, government-organized mob violence, break-ins and kidnapping stalked Ye Haiyan’s dogged efforts–“To remain silent is to be an accomplice”–on behalf of the girls and their parents, culminating with a protest rally staged with a handful of Chinese human rights advocates. Their journey for justice was filmed by Nanfu Wang.

Ms. Wang faced hardships of her own growing up in rural China. But her resilience enabled her to acquire a hard-won education at home and advanced degrees in the States, including graduate film studies at New York University. Her fearlessness, albeit vigilant, is clearly evident in the film, her first feature, as she guides her viewers through the many obstacles facing Ye Haiyan and her fellow protesters, including human rights lawyers Wang Yu and her husband.

Chinese human rights lawyer, Wang Yu, handed out copies of the UN Convention on the Rights of the Child treaty to passersby at a rally in May 2013 to protest the rape of school girls by their principal and a government official. She brings clarity to the case in HOOLIGAN SPARROW on PBS; but, as a result of her fearless advocacy, she was charged with subversion and jailed. Photo courtesy Nanfu Wang.

Rough and topsy-turvy at times, Nanfu Wang’s footage of the protest rally, its back story and epilogue were shot surreptitiously. It took all of her ingenuity to get it and herself out of China safely. And the story she tells in Hooligan Sparrow is chilling.

“The chain of events I witnessed in the months that followed the protest shocked me,” says filmmaker Nanfu Wang. “I’ve never had illusions about fairness in China’s justice system or the accountability of its government.  But I never expected to see ordinary people turn on their neighbors who were fighting for their rights.”

Hooligan Sparrow, the film and the woman who inspired it, has an important message to impart.  I never would’ve believed in this day and age, circa 2016, that some Americans, men and women, would continue to support the Presidential candidacy of a serial womanizer and admitted sexual predator and take his word over that of his alleged victims. Or that our hard-won freedoms of the press and speech, among others, are being twisted to incite voter paranoia and arouse doubt. Hooligan Sparrow details what it’s like to live in a land where “human rights” and “justice for all” only seem to apply to those at the top. It’s frightening, it’s real and it’s a timely wake-up call.