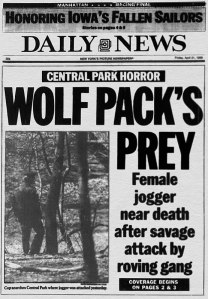 Tonight, I encourage you to DVR the latest installment of Ready for Love, Dancing with the Stars or NCIS and turn your attention instead to The Central Park Five which debuts on PBS at 9:00 p.m. EDT (Check local listings).

The Central Park Five is a significant departure for filmmaker Ken Burns, who partnered with his daughter, Sarah Burns, and her husband, David McMahon, to explore the botched investigation and wrongful convictions of five young black and Hispanic youths for the brutal rape and beating of a 28-year-old Wall Street investment banker found near death in New York City’s Central Park in the early morning hours of April 20, 1989.

The film was directly inspired by Sarah Burns’ studies at Yale and her thesis that was later published in book form in 2011 as The Central Park Five: The Untold Story Behind One of New York City’s Most Infamous Crimes. When I spoke with her dad, Ken Burns, at that time during an interview about his upcoming film, Prohibition (PBS, Fall 2011), we also discussed the women who have directly impacted his life’s work and choice of film subjects.  He was eager then to discuss his first collaboration with his daughter, Sarah, and her filmmaker husband David, on a film that would transcend his signature historical focus to involve investigative reporting.  Here is a bit of that conversation with Ken Burns from 2011:

“The professional decisions are completely separate, but one ignores the role of women at one’s peril,” said Burns to me during a conversation in March 2011.  “And I’m sure that’s in some ways born from my experience living with lots and lots of women who helped me and influenced me in lots and lots of ways.  My daughter is publishing a book this spring (2011) on the Central Park jogger case, focusing on the five black and Hispanic boys who were convicted and sent to jail and served out their full terms without parole for a crime they didn’t commit.  And that’s the little-known side of it.  We were all, of course, holding our breaths witnessing the heroic survival of the victim herself.  But there were five other victims that night, and a kind of over-eager police justice and media that were very quick to convict these boys who were children.  One was 16, and he served the longest sentence; the rest were 14 or 15.

“My daughter was interested in this when she was at Yale in 2003,” Burns continued. “She graduated in 2004; and she put off transforming a thesis which a professor advised her was of book quality, and finally she did.  And we were so compelled by the story that she was struggling to tell in her book, which I think she’s told very well, that we agreed to do a film.  It is really wonderful to work with not only your son-in-law, as I have since the late 1990s, but also with one’s daughter.”

The Central Park Five opened theatrically in New York in November 2012, and tonight will debut on PBS.  As an examination of the deeply ingrained effects of racism in America, it stands hands above The House I Live In, the bloated film covered in my previous post (April 8, 2013) that lacked a strong narrative focus implicating racism in the failure of America’s war on drugs. The Central Park Five, in contrast, is a riveting and eye-opening look at how five Harlem teenagers who were in the wrong place at the wrong time lost their childhoods, their innocence and subsequent years of their lives when they were demonized in the press, humiliated in the cogs of the criminal justice system, and incarcerated with juvenile offenders (and, in one case, hard-core adult offenders) for a crime they didn’t commit.

The back story of this case of racial profiling and a failed criminal justice system, fueled at the time by what could only be called arrogance on the part of the media and detectives assigned to the case, follows Antron McCray, Kevin Richardson, Raymond Santana, Korey Wise, and Yusef Salaam from their arrests through their muddied confessions via relentless interrogation by seasoned homicide detectives. The boys’original videotaped confessions are included in the film and are shocking examples of how their words were literally orchestrated by detectives and a high-profile Assistant D.A.

Today, after they have managed to piece together their lives, the five young men quietly, articulately and without visible rancor relate their life stories before, during and after their convictions, incarcerations (six to 13 years) and exoneration.  Significant family members also remember the confusion, disbelief and shame that decimated their families at the time. Tears are shed on screen, and you will surely share the pain and relief that they felt after they recall the confession (replayed here) of serial rapist Matias Reyes to the crime and its support by DNA evidence from the scene.

The Central Park Five is a remarkable segue into investigative journalism by Ken Burns with Sarah Burns and David McMahon that underscores how prejudice, racial profiling, sloppy detective work and the miscarriage of justice destroyed many innocent lives. And how, through the perspective and example of these young men, we can learn, heal and grow from those mistakes.

To join in the continuing discussion, visit http://www.facebook.com/TheCentralParkFive and use #CP5 on Twitter.   You can read my interview with Ken Burns @  http://www.edgemagonline.com/interview_ken_burns.htm  —Judith Trojan

4 Responses to The Central Park Five Debuts on PBS Tonight