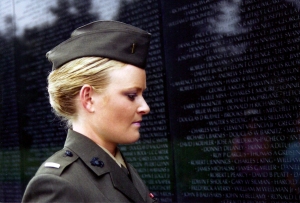 Tomorrow night, the PBS series Independent Lens will host the broadcast premiere of a documentary I first covered during its theatrical release last summer (FrontRowCenter, July 2012).

Given the horrifying jump in sexual assaults in the military (current statistics were released by the Pentagon last week and published on the front page of The New York Times, May 8, 2013), I feel compelled to rerun my review and encourage everyone to watch.  (PBS, Monday, May 13, at 10:00 p.m. EDT, Check local listings.)  The film was subsequently nominated for a 2012 Academy Award.

Filmmakers Kirby Dick and Amy Ziering give new meaning to the dictum, “don’t ask, don’t tell,” as they expose the epidemic of rape within the U.S. military in their new investigative documentary, The Invisible War.  The statistics put forth in this film are staggering:  “20% of all active-duty female soldiers are sexually assaulted. Female soldiers aged 18 to 21 accounted for more than half of the victims” in 2011.

The young women and one man profiled in The Invisible War, representing all four branches of the armed forces, were sexually harassed prior to their brutal rapes while on the job in their chosen profession, by male colleagues and, in some cases, by their superiors.  With careers and lives forever derailed, as much from the ongoing military cover-ups as from their assaults, the soldiers struggle to regain their balance and dignity in the aftermath.

Yet, despite the fact that their dreams to serve this country have been irrevocably shattered, they never let go of the idealism, patriotism and purpose that led them to pursue careers in the military in the first place.  This makes their current struggles for acknowledgement and restitution all the more painful and poignant.

Their victimizers, meanwhile, continue to thrive and rise through the ranks.  It’s no surprise that, with prosecution rates for sexual predators in the U.S. military shockingly low, only 191 perpetrators were convicted at courts-martial out of the 3,192 assaults reported in 2011.  Department of Defense statistics also estimate that “in 2011 alone, over 19,000 sexual assaults occurred in the military” and that “less than 14%” were reported.  (Since this film was produced, the Pentagon now estimates “that 26,000 people in the armed forces were sexually assaulted” in 2012.)

The Invisible War is an eye-opener for those of us who believed that sexual harassment and assault in the workplace–and, specifically, in the U.S. military–are history. The dedicated soldiers who courageously agreed to come out of the shadows and tell their painful stories, after exhausting every avenue for justice through military channels, deserve our commendation and support.—Judith Trojan

2 Responses to The Invisible War Debuts Monday Night on PBS