Gentleman Jack Proves She Ain’t No Gentleman on HBO 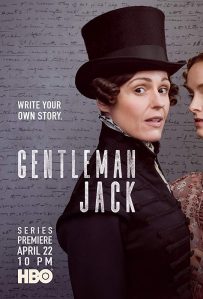 “She was a real player.  She was very good at sex. It was high on her agenda of what was important.”–writer/director Sally Wainwright.

There was nothing ordinary about Anne Lister (1791-1840). Wealthy Yorkshire landowner, businesswoman, diarist and international gadabout Anne Lister was an unconventional force to reckon with in Regency England during the first half of the 19th century.

Her intellectual pursuits (anatomy, forensics, geology) defied female convention.  And at a time when women were festooned with ruffles and flourishes and relied upon men for marriage, Lister favored heavy black overcoats, top hats… and women who, according to Lister’s explicit, cleverly coded diaries, were more often than not willing to share her bed.

Anne Lister’s moniker, Gentleman Jack, is an apt title for the new, eight-episode dramatic miniseries, created, written and co-directed by Sally Wainwright for HBO/BBC.  Episode One— “I was just passing”– debuts on HBO tonight, Monday, April 22, 2019, 10:00 – 11:00 p.m. ET/PT. (Episodes 2-8, follow on successive Mondays in May and June.)

Anne Lister’s remarkably bold lifestyle has been the subject of various literary and Brit TV efforts, but was first documented by Lister herself in voluminous daily diary entries (with her sexual exploits detailed in code).  The diaries (and her lesbian romances) date from her teenage years. 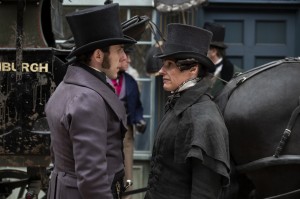 Gentleman Jack jumps feet first into Lister’s life story, circa 1832, as she returns to Shipden Hall, her ancestral home in Halifax, Yorkshire, bent but unbroken by yet another female lover’s decision to marry a man. Actress Suranne Jones tears up the screen as bold, charismatic Anne Lister.  With a wink and nod to the camera, she lets nothing stand in her way as she throws her family (sister, elderly aunt and father) and servants, tenant farmers and neighbors into a tailspin when she sets various progressive protocols in motion as Shipden’s headstrong heir.

She threatens to modernize stuffy Shipden Hall, adding fanciful outbuildings and lush, park-inspired landscapes to the estate grounds. She demands overdue rent from lax tenant farmers, and haggles smartly with local coal magnates over title to her estate’s rich coal deposits.  All this, she hopes, will set the stage for a new, more permanent local romantic conquest… the seduction and, yes, a hoped for church sanctified union with the shy, sheltered young heiress, Ann Walker (Sophie Rundle), next door.

Anne Lister was determined to buck the status quo and live true to her God-given nature, which she apparently paraded confidently in public and enjoyed in the bedroom. She would never consider marrying a man, not even under societal pressure for convenience or financial gain.  Instead, she set her romantic and financial sights on women like young heiress Ann Walker.

There’s no question that Gentleman Jack is a fascinating departure from run-of-the mill historical dramas.  Series creator Sally Wainwright hits the ground running as she introduces 21st century viewers to a real-life, ballsy, unconventional Regency-era heroine who, as it turns out, has gained notoriety not only for her historical relevance as a swashbuckling, marriage-minded lesbian but also as an acclaimed diarist. 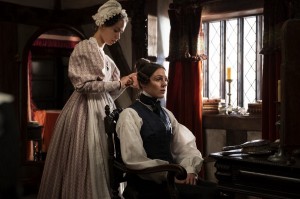 There are also a host of colorful marginal characters with great potential here:  her fussy spinster sister, Marian; her supportive elderly aunt and no-nonsense dad; as well as comical servants, faithful and fearsome tenant farmers; and sleazy Trumpian coal magnates.  All have their moments, and they do much to enliven the saga of Lister’s pursuit of conflicted Miss Walker.

It’s not long before Lister and Walker’s growing passion and love for each other are tested by touching missteps and life-altering crises.  But, in the end, as Lister’s bravado and Walker’s insecurities fall away, Gentleman Jack turns into an incredibly moving, true romance of the highest order… all of it driven by Anne Lister’s actual diary entries.

It should be noted that the intimate scenes between the two women are exquisitely choreographed and acted:  simultaneously tender and powerful, they are not in any way gratuitous. 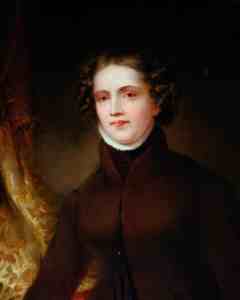 Check for additional HBO play dates in your region in the days and weeks ahead, and the film’s availability on HBO NOW, HBO GO, HBO On Demand, affiliate streaming platforms and DVD.

Gentleman Jack was scheduled to premiere concurrently on the BBC on April 22, 2019. And, one month later, on May 23, 2019, HBO and BBC announced that they are renewing the series for a second season. This is definitely welcome news!–Judith Trojan