“We’re on the side of the little guy.”

I may have been born and raised in New Jersey but my dreams were all wrapped up in the promise and allure of the shining city on the Hudson. On good days and bad, as I was growing up, the iconic Manhattan skyline sat like a majestic magnet on the horizon to the east of my hometown. I’m proud to say that I spent more than half of my life working and studying in New York City.  I consider myself a New Yorker by choice… by way of NJ Transit… and have no regrets.

My lifelong show biz predilections and career in the film and publishing industries required that I keep abreast of all of the daily media news fit to print. My newspaper of choice continues to be The New York Times. But pre-Trump, I confess to devouring the New York Post and never missed the New York Daily News, even if I had to read it over the shoulders of fellow commuters on the bus or subway.

Now that I’ve screened the wonderful new feature-length HBO documentary, Breslin and Hamill: Deadline Artists celebrating superstar New York newspaper columnists Jimmy Breslin (1928-2017) and Pete Hamill (b.1935), it’s clear that they were producing some of the best journalism New York City newsprint had to offer for five decades.  I’m ashamed to admit that, back in the day, I bypassed their columns on a regular basis.

No matter where you currently hang your hat, if you are now… or ever have been… an avid New Yorker, were born and raised in its boroughs, relish reliving the adventures of your youth on its shores or could use a refresher course highlighting the last 50 tumultuous years of NYC history, be sure not to miss Breslin and Hamill: Deadline Artists.  The feature-length documentary, directed and produced by Jonathan Alter, John Block and Steve McCarthy, debuts on HBO tonight, Monday, January 28, 2019, from 8:00 – 9:50 p.m. ET/PT.

As the film points out, from birth through old age, Jimmy Breslin and Pete Hamill had a lot in common.  They both grew up poor in New York’s Irish-American working class neighborhoods, with dominant mothers, for better (Hamill) or worse (Breslin), and hard-drinking fathers. They were street smart from an early age and cultivated friends and enemies in dark places. They broke into the news business at a time when print journalism flourished and as many as seven newspapers competed to snag readers with breaking daily news.  Newsrooms were choked with smoke, and hundreds of reporters without college degrees sat shoulder to shoulder pounding away on manual typewriters. 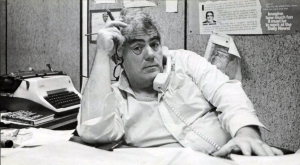 Brash journalist Jimmy Breslin was known for his take-no-prisoners approach to storytelling on and off the page. Photo: Paul Schwartzman. Courtesy HBO.

Breslin and Hamill touched all bases in their careers, as columnists for the New York Herald Tribune, the New York Daily News, Newsday and the New York Post; as best-selling book authors; as colorful, smart-assed TV talk show guests; hard-partying gadabouts and red carpet celebrities. But their immigrant roots and ongoing connections in the streets and back alleys of NYC and its boroughs with cops and cons and working class stiffs shaped their extraordinary prose and fueled their lifelong empathy for the underdog and zeal to challenge discrimination.

The film revisits in vivid detail–via Breslin and Hamill’s brilliant prose, vintage headlines, graphic news footage, and first person narratives–some of the stories that broke during their careers.  Included are Son of Sam’s affinity for Breslin; the discriminatory firing of a young, female Hispanic cop; the public support for subway vigilante Bernhard Goetz; Donald Trump’s incendiary impact on the Central Park Jogger case; Nixon’s legacy of lies; the victimization of AIDS patients; and Hamill’s gripping memories of being on-site during Robert F. Kennedy’s assassination and caught in the detritus of the terrorist attacks on September 11, 2001.

Breslin and Hamill:  Deadline Artists smoothly incorporates the duo’s individual biographies (early, middle and sunset years) with stirring quotes from their writing and reflections from an impressive array of their peers, colleagues and family members.  Archival footage of fiery Breslin (who thought nothing of taking a cab and a beating in the middle of the race riot to get his story) and dashing Hamill (who dated Jackie Kennedy and Shirley MacLaine, concurrently) in their salad days contrasts sharply with the men they became in advanced age as they look back wistfully at choices they made as relentless newspaper columnists and, closer to home, as hard-drinking husbands and fathers. Jimmy Breslin died on March 19, 2017.

Breslin and Hamill: Deadline Artists provides long overdue appreciation for the unique voices of two seasoned reporters who sought out and documented the stories of the little guys and gals who were impacted by the big stories of their day. I for one have been inspired by the film to catch up with their work and learn from their example. The film’s fascinating print newsroom back story will be an evergreen asset in high school and college journalism classes as well.

Breslin and Hamill: Deadline Artists debuts on HBO tonight, Monday, January 28, 2019, from 8:00 – 9:50 p.m. ET/PT. (Check listings for additional HBO play dates in the days and weeks ahead and the film’s availability on HBO On Demand and streaming via HBO Max.) –Judith Trojan

2 Responses to Breslin and Hamill: Deadline Artists Headlines on HBO