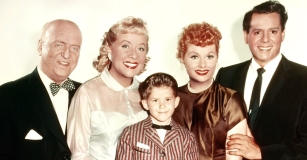 I loved Lucy. Unlike Mama, Harriet Nelson and Margaret Anderson, wife to the father who always knew best, Lucy Ricardo never tied her apron strings. As a housewife, she was rarely content or a success in the traditional sense of the term.  She did try.  But her efficient, “happy homemaker” schemes invariably tested husband Ricky’s Latin patience, and havoc ensued.

Lucy’s societal aspirations, “part-time jobs” and relentless quest for her own show business career drove a wedge between the couple, generating unforgettable comic shtick. Her bond with fellow housewife Ethel Mertz was possible only because Ethel was a closet vaudevillian and, like Lucy, had nerve to burn.

Though I never doubted Lucy’s love for Ricky, Little Ricky, and her surrogate family–Ethel and Fred Mertz–I knew that Lucy would never rest until she tried (and she tried everything) to make a break from her everyday routine

Nowhere were Lucy’s aspirations more evident than in Pioneer Women, a memorable I Love Lucy episode that originally debuted in black and white on CBS over half a century ago on March 31, 1952.  Pioneer Women now joins the growing list of colorized classic I Love Lucy episodes to be piggybacked with the previously colorized and aired Christmas Episode.  Tonight, Friday, December 14, 2018, the two half-hour episodes morph seamlessly into CBS-TV’s annual hour-long I Love Lucy Christmas Special, 8:00-9:00 p.m. ET/PT. 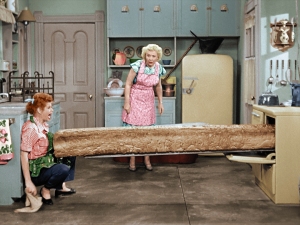 You can almost smell the aroma of fresh-baked bread and home-churned butter as Lucy and Ethel tackle baking and churning the old-fashioned way in Pioneer Women… well, maybe not.

When Lucy and Ethel beg their husbands to buy them dishwashers (Lucy calculates she’s washed 219,000 dishes in 10 years of marriage, and her hands have had enough!), the guys’ cheap skate solution (rubber gloves!) falls on deaf ears. And so begins a fifty-buck bet and battle of the sexes over who best can live without modern conveniences.

As the competitive foursome don the garb and accoutrements of yore, they are snafued by two snooty members of the Society Matrons’ League, who must approve Lucy and Ethel for coveted membership. Lucy takes the high road, but not before making a monumental misstep in the kitchen.  I prefer to think of her six-foot-long loaf of home-baked bread as an over-achievement rather than a colossal misuse of yeast.

Originally thought to be “lost,” the December 1956 Christmas Episode is a nostalgic Christmas eve visit to the Ricardos’ Manhattan apartment where Lucy and Ricky trim their tree and prep gifts to surprise Little Ricky, their Santa-obsessed five-year-old. Without missing a beat, Ricky and Lucy concoct a whimsical timeline for Santa to deflect their son’s questions and insistence on remaining awake to greet him fireside. 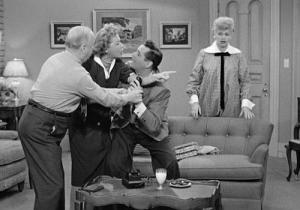 The benchmark I LOVE LUCY birthing episode is now colorized and recalled in the I LOVE LUCY CHRISTMAS SPECIAL on CBS.

Fred and Ethel Mertz join the fun as Lucy and Ricky wistfully recall Lucy’s unexpected pregnancy announcement at Ricky’s nightclub, and Ricky, Fred and Ethel’s subsequent clumsy effort, months later, to get Lucy to the delivery room on time. Welcome colorized flashbacks are intercut from these classic episodes.  The latter, still hilarious after all these years, continues to serve as the classic benchmark for all TV sit-com “birthing” episodes that followed.

Finally, in a musical interlude, Lucy’s attempt to sing “Jingle Bells” reminds Ricky and the Mertzes of the time tone-deaf Lucy crashed their barbershop quartet with disastrous results.  A flashback of their sabotaged performance is included. 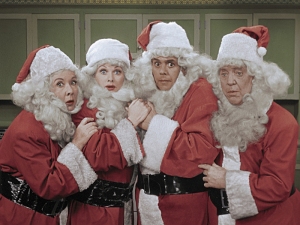 Faux or funny? This quartet is featured in the annual I LOVE LUCY CHRISTMAS SPECIAL broadcast on CBS. Photo ©2017 CBS Broadcasting, Inc. All Rights Reserved.

This year’s annual I Love Lucy Christmas Special will be broadcast on CBS tonight, Friday, December 14, 2018, 8:00-9:00 p.m., ET/PT. (Also check OnDemand, Netflix, and DVD availability of vintage I Love Lucy episodes.)  And when you’re busy in the kitchen this season whipping up a batch of holiday cookies, cakes and breads, remember to carefully calibrate your yeast, downsize your dough and load up on laughs. Happy Holidays!–Judith Trojan