A nose for nuts? The Fox squirrel, the largest tree squirrel species in North America, is one of many squirrel species featured in NATURE: A SQUIRREL’S GUIDE TO SUCCESS on PBS. Photo courtesy TessarTheTegu/Shutterstock.

“You can’t be friends with a squirrel. A squirrel is just a rat with a cuter outfit.”– Sarah Jessica Parker.

My feelings exactly…that is until I screened A Squirrel’s Guide to Success and came away with restored appreciation for the critters that claim almost 300 species in their family tree.  The latest installment of the fascinating Nature series, A Squirrel’s Guide to Success, debuts on PBS tonight, November 14, 2018, 8:00 – 9:00 p.m. ET. (Check local listings for air times and repeat broadcasts in your region and  http://www.pbs.org/nature for online streaming, DVD and Blu-Ray availability.)

Anyone who knows me well knows exactly when and where my childhood affection for squirrels hit the skids. They ceased being cute when I discovered that the squirrel family from hell had colonized the walls and ceilings of my new apartment. They had set up shop long before my arrival…nesting in the ceiling above the kitchen and cackling, chewing and scuffling with their frenemies on the ceiling above the bedroom. I can still remember a friend’s congratulatory remark when she heard I had landed a top floor apartment: No more “unwelcome creepy crawlers”! 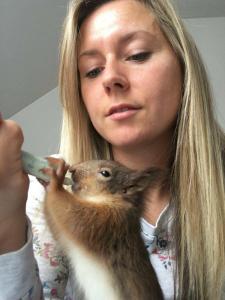 Squirrels are surprisingly intelligent (as this film documents) and tireless creatures of habit. They always return to their home (nesting) turf and the nuts they buried in your garden or hid in your attic or under your deck.  Generations of one squirrel family became my worst nightmare as they relentlessly tried to re-inhabit and nest in spaces we wired and cemented shut.

As hard as it might be to believe, there are highly educated people who love squirrels and dedicate their professional careers to their study, rescue and rehabilitation.  Nature: A Squirrel’s Guide to Success highlights the work of several American university-based scientists, a wildlife filmmaker and a delightful young Scottish woman whose passion for the critters is almost contagious.

If you’ve ever questioned whether the annoying Gray squirrel in your backyard has more appealing relatives, filmmaker Tom Jarvis and his team introduce viewers to various fascinating species, including the Eurasian red squirrel, the Arctic ground squirrel, the Jungle-striped squirrel, the Malabar giant squirrel, the Japanese and Northern flying squirrels and the Fox squirrel.  Of course, depending on where you live in the U.S., you may be familiar with the Eastern chipmunk or Prairie dog, also members of the squirrel family.

As is the case with all films in the PBS Nature series, the cinematography is outstanding. Framed by innocuous voice over narration read by “Saturday Night Live” alum Ana Gasteyer and embellished with vignettes introducing various professional squirrel specialists, the film’s breathtaking visuals zoom in on numerous squirrel species and their habitats.

You may be wondering why, after a short hiatus, I am reviewing a film about squirrels in FrontRowCenter instead of  some more politically relevant documentary. Well, real life as it has been unfolding daily (hourly?) on the news is depressing enough for me.  Rather than focusing on the two-legged nuts in our nation’s Capitol who are playing fast and loose with facts, decimating our moral fiber and pulverizing our planet, I’d much rather encourage viewers to appreciate the four-legged nut lovers in our parks and backyards whose only crime is hoarding food and invading our attics.  And for that noble effort, I award A Squirrel’s Guide to Success  4 out of 5 Acorns!

Produced and directed by Tom Jarvis, Nature: A Squirrel’s Guide to Success is a co-production of THIRTEEN PRODUCTIONS LLC and BBC Studios in association with WNET. The hour-long documentary debuts on PBS tonight, November 14, 2018, 8:00 – 9:00 p.m. ET. (Check local listings for air times and repeat broadcasts in your region and   http://www.pbs.org/nature  for online streaming, DVD and Blu-Ray availability.) –Judith Trojan

Judith Trojan is an Award-winning journalist who has written and edited more than 1,000 film and TV reviews and celebrity profiles.
View all posts by Judith Trojan →
This entry was posted in TV and tagged A Squirrel's Guide to Success, Animals, BBC Studios, NATURE, Nature and Wildlife, PBS, Rodents, Sheelagh McAllister, Squirrels, Tom Jarvis. Bookmark the permalink.