Nora Ephron Scripted and Unscripted in Everything Is Copy 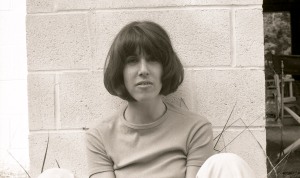 On the cusp of greatness, young and feisty journalist Nora Ephron in the 1960s. Photo: Dan Greenburg. Courtesy HBO.

Sharp-tongued, witty (“writers are predators”) and beloved by notable New York and Washington literati, Nora Ephron is the subject of her eldest son Jacob Bernstein’s touching, smartly filmed and edited profile, Everything Is Copy. The film made its world premiere at the 53rd annual New York Film Festival last fall and debuts on HBO tonight, Monday, March 21, 2016, 9:00 – 10:30 p.m. ET/PT. (Check listings for additional HBO playdates in the weeks ahead and availability on HBO NOW, HBO GO and HBO On Demand.) At this writing, the film is also in limited theatrical release.

I was shocked like many others to hear of Nora Ephron’s untimely death at 71 in 2012. Driven by her mother, screenwriter Phoebe Ephron’s mantra that “everything is copy,” Nora (1941-2012) dove head first into public consciousness as a print journalist, essayist, novelist, humorist, screenwriter and playwright. She also was one of the few women who managed to successfully crack Hollywood’s old boys’ club when she added “film director” to her lofty resumé. 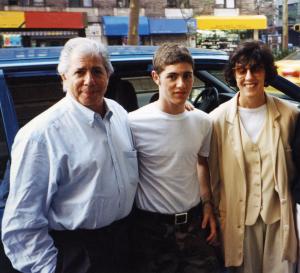 All of them writers… from left: Carl Bernstein, Jacob Bernstein and Nora Ephron in 1996. Photo courtesy HBO.

Journalist and fledgling filmmaker Jacob Bernstein, Nora’s son with second husband Carl (All the President’s Men) Bernstein, does a bang up job of evoking his mom’s mindset, drive and personal peccadilloes in Everything Is Copy.

“When you slip on a banana peel, people laugh at you,” says Nora Ephron early on in Everything Is Copy.  “But when you tell people you slipped on the banana peel, it’s your laugh. So you become the hero, rather than the victim of the joke.” Her son Jacob captures quite astutely the reality of his mom as hero and victim in her own life and others’ lives as well.

Especially enlightening are the connections made between her words on the page and the drama played out in her life, the secrets she revealed about others and those she didn’t (most notably, her own fatal illness). Bernstein not only joins, on camera, an impressive line-up of articulate literary and Hollywood giants, whose timelines are important to this story; but he also gives ample screen time to his dad, Carl.  Father and son manage an honest dialogue as they and their shared friends discuss Carl’s impact on his ex-wife’s life and work. (His affair during Nora’s second pregnancy led not only to their break-up, but Nora’s best-selling novel and 1986 film adaptation, Heartburn.)

Fortunately, the writer/director/feminist’s body of work lives on to give us a much-needed boost during challenging times of our lives.  Her female characters, most memorably embodied by Meryl Streep and Meg Ryan, tackle many of the issues we face as women as we attempt to forge healthy, loving communicative relationships with men (When Harry Met Sally, Sleepless in Seattle), reinvent ourselves (Julie & Julia, You’ve Got Mail) and navigate the minefields of infidelity (Heartburn), toxic environments (Silkwood) and aging (I Feel Bad about My Neck). There are great clips from all of her movies in Everything Is Copy and readings from her notable essays.

In real life, Ephron made a good match with husband #3, author Nicholas Pileggi.  In an industry run by men, she conceived, wrote and directed a string of box office hits featuring memorable female protagonists.  Few women, then and now, have had such a track record.  She was raised and dodged bullets in the Hollywood trenches and came out with a solid marriage, two kids and a fine body of work that encourages women to challenge the status quo.

While Ephron’s New York sensibility and sense of humor permeate her work, her films give all women–Blue State, Red State and those in-between–a voice and a happy ending.  For Ephron, obstacles were meant to be surmounted, a point she made clear in her commencement speech to 1996 grads, all women, at her alma mater, Wellesley College (MA):

“My class went to college in the era when you got a master’s degree in teaching because it was ‘something to fall back on’ in the worst case scenario, the worst case scenario being that no one married you and you actually had to go to work. … We weren’t meant to have futures, we were meant to marry them.  We weren’t meant to have politics or careers that mattered, or opinions, we were meant to marry them. … Be the heroine of your life, not the victim. … Whatever you choose, however many roads you travel, I hope you will find some way to break the rules and make a little trouble out there.  And I also hope that you will choose to make some of that trouble on behalf of women.”

Nora Ephron covered a lot of “trouble” as a writer and feminist. Her son does right by her in Everything Is Copy and certainly has the potential to make his own mark as a filmmaker as well. The film should be an evergreen programming choice in journalism, film appreciation and women’s studies in high schools, colleges, universities and libraries.

You can catch Everything Is Copy on HBO tonight, Monday, March 21, 2016, 9:00 – 10:30 p.m. ET/PT. (Check listings for additional HBO playdates in the weeks ahead and availability on HBO NOW, HBO GO and HBO On Demand.) The film is also currently in limited theatrical release.–Judith Trojan