Melvin, the childhood hambone, itinerant drummer and Catskill Borscht Belt entertainer-cum-screenwriter, playwright, producer, director, tunesmith, actor, comedian and raconteur, is only one of 14 individuals on the planet to have won Emmy, Grammy, Oscar and Tony Awards.  He’s well-known to diehard comedy fans as “The 2000 Year Old Man.”  In short (and he’s proud to be vertically challenged), he’s known in the trade as Mel Brooks.

Whether or not you catch Mel’s truncated AFI tribute special on TNT in late June (date and time tba), be sure not to miss American Masters—Mel Brooks: Make a Noise premiering nationally on PBS tonight, Monday, May 20, at 9:00 p.m. EDT/PT (Check local listings).

Unlike the annual AFI tributes which have deteriorated into tiresome lovefests, Mel Brooks: Make a Noise gives Mel just enough leg room (casually dressed and seated at a table on a barebones soundstage) to tell his remarkable life story without the temptation to rearrange the furniture or rewrite the script. Filmmaker Robert Trachtenberg keeps Mel on track by lobbing sharp questions his way from just out of camera range and embellishes the comedy legend’s career trajectory with well-chosen film and TV clips, archival  footage and photos, and current and vintage commentary from colleagues and friends. 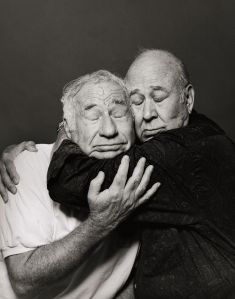 Kudos go to writer, director, producer, interviewer Robert Trachtenberg, who also serves as a masterful co-editor here (with Asako Ushio) and to the Award-winning PBS executive production team at American Masters (Series Creator and Executive Producer Susan Lacy, Series Producer Prudence Glass and Supervising Producer Julie Sacks) for backing this fine film. The clips from Mel’s early TV work on Your Show of Shows and such film classics as The Producers, Blazing Saddles, Young Frankenstein, Spaceballs, History of the World: Part 1 and To Be or Not To Be are carefully chosen, hilarious and seamlessly integrated into this artful, often touching bio.

The rewinds of Mel’s clever Tony and Oscar acceptance speeches are also included; but the film and TV clips are mere backdrops to his own colorful anecdotes about the high and low points of his career, his reflections on the early loss of his father and enduring love for his mother, his respectful acknowledgement of legends Sid Caesar and Alfred Hitchcock and, most especially, first wife Florence and second wife Anne Bancroft, to whom Mel was married for 41 years until her death in 2005.  There are numerous surprising revelations in this film; for example, it will come as a surprise to some and reminder to others that writer/director/producer Mel Brooks not only broke comedy barriers in film with once controversial, now legendary shtick but also championed  (as executive producer) such serious-minded arthouse dramas as The Elephant Man, Frances and 84 Charing Cross Road.

American Masters—Mel Brooks: Make a Noise chronicles the life, work, passions and high anxieties of a multi-talented, complicated comedy legend and will have you laughing out loud every five minutes.  Evergreen, engrossing and extremely entertaining, the film is sure to have a long shelf life and garner some awards of its own down the road.  Enjoy its premiere tonight at 9 p.m. EDT/PT on PBS (and check local listings for repeat airdates).  A DVD with bonus material promises to be available from Shout Factory on Tuesday, May 21.—Judith Trojan