“The hum of bees is the voice of the garden.”–renowned landscape architect Elizabeth Lawrence.

As a kid, family gardens were my playground. What happy memories my cousins, friends and I forged among those beautiful flowers and that tasty vegetation. But frankly, we took it all for granted. I had no idea how much work it took for my grandparents to maintain their robust crop of vegetables, flowers, fruit trees and vines, or my mom to plant, weed and water her lovely flowers year after year.

The only downside?  Bees!  They were not to be messed with. We had no idea that those stinging pests were not pests at all. They worked as hard or harder than my grandparents and parents to preserve the gardens we loved.

Now, I’m an avid gardener and am proud that my garden is buzzworthy.  I weed and prune surrounded by bees that used to terrify me.  On any given day in my garden, bees outnumber birds, butterflies, bunnies and groundhog Bob and his buddies, all of whom seem to enjoy snacking there.  Sadly, as an adult living in the 21st century, I have to face the fact that the worldwide honey bee population is dwindling due to parasitic and toxic chemical overload; and that without bees, our gardens, crops and planet would be toast.

The U.S. Department of Agriculture estimates that “Honey bees pollinate 80% of the U.S. insect crops–over $20 billion worth of crops each year.”  Albert Einstein once predicted, “No more bees, no more pollination, no more plants, no more animals, no more man.” 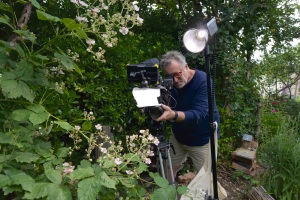 British photographer Martin Dohrn was accustomed to travelling the world, capturing the comings and goings of a wide array of wildlife on film.  But when COVID-19 deemed his canvas off-limits, he was confined to his home in Bristol, England.  Like many of us…me included…he turned to his backyard garden for solace.  It worked for me, and it sure worked for him.

His tiny, wildly unmanicured urban garden not only served as a much needed oasis for Dohrn and his family, but also provided a fascinating new focus for his work.  His garden was home to more than 60 species of wild bees, and Dohrn decided to tell their story.

Martin Dohrn’s breathtaking bee footage and charming narrative grace the Season 40 opener of the PBS Nature series.  My Garden of a Thousand Bees premieres tonight, Wednesday, October 20, 2021, 8:00 – 9:00 p.m. ET.  Check  local listings for air times and repeat broadcasts in your region and below for streaming and DVD availability.

During the Spring 2020 COVID lockdown, Martin Dohrn unapologetically became enamoured with bees, perhaps the most difficult critters in any landscape to film. Their size and speed initially stymied Dohrn, but his determination to get up close and personal with his wild backyard bee buddies (more than 60 species!) paid off.  Dohrn literally rebuilt his extensive camera equipment on his kitchen table to meet the challenge.

Thanks to Dohrn’s patience and enhanced equipment, he was not only able to close in on the common bumblebee, eyeball to eyeball, but individuals of other unique bee species as well.  At first, Dohrn’s amazing close-ups may conjure up memories of those huge, scary faux Hollywood insects popular on screen in the 1950s.  But soon, you’ll marvel at the amount of detail Dohrn was able to record, including the sight and sound of bee wings flapping (they sound like helicopters!).

Dohrn misses nothing in Bee City, as he calls it.  From tunnel scouting and nest building, mating and egg laying, pollen collecting and tackling marauding bee opportunists and arch enemies like wasps and spiders, it’s clear that the short life of a bee is filled with high drama.  And much of it occurs in crevices, holes and tunnels.  In fact, Dohrn became so entranced with his backyard bee community that he embellished their habitats with additional holes, and soon began to identify and follow specific individuals.  One bee, whom he called Nicky for her nicked wing, even seemed to recognize him and allow him to film her without buzzing off.

“My hope is that Martin Dohrn’s emotional connection with the bees in his garden will resonate and lead to a new appreciation for these vital insects,” said Fred Kaufman, executive producer for #NaturePBS.

Thanks to Martin Dohrn and his determination to shine a light on bees’ complex lives and importance to our  ultimate well-being, I guarantee that after watching Nature: My Garden of a Thousand Bees, you’ll never take them for granted again.

Directed by David Allen, Nature: My Garden of a Thousand Bees is a production of Passion Planet, The WNET group and HHMI Tangled Bank Studios in association with Ammonite Films.  The film premieres on PBS tonight, Wednesday, October 20, 2021, 8:00 – 9:00 p.m. ET.  Check local listings for air times and repeat broadcasts in your region; http://www.pbs.org/nature and the PBS Video app for streaming info, concurrent with broadcast; and http://ShopPBS.org for DVD and Blu-Ray availability. –Judith Trojan

Judith Trojan is an Award-winning journalist who has written and edited several thousand film and TV reviews and celebrity profiles.
View all posts by Judith Trojan →
This entry was posted in Film, Science, TV and tagged Bees, Conservation, David Allen, Fred Kaufman, Insects, Martin Dohrn, My Garden of a Thousand Bees, NATURE, Nature and Wildlife, PBS. Bookmark the permalink.