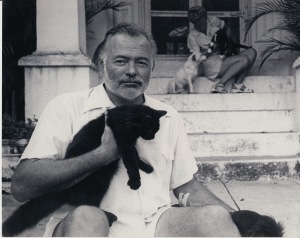 American novelist, short story writer, journalist and sportsman ERNEST HEMINGWAY (1899 – 1961) at his home in Cuba, circa the 1950s. Photo courtesy A. E. Hotchner.

“Our intent is to offer viewers an honest portrayal of a complex and conflicted writer who left an indelible mark on literature.”–Ken Burns.

The Sun Also Rises, A Farewell to Arms, The Old Man and the Sea, The Snows of Kilimanjaro, For Whom the Bell Tolls.  Novels, short stories, battlefield dispatches, magazine columns, newspaper reportage, and a raft of unpublished personal correspondence. Ernest Hemingway mastered them all, and has been deemed the “most revered American writer since Mark Twain.”

Ernest Hemingway’s distinctive pared down prose, deceptively masculine sensibility and impressive output during the first half of the 20th century grabbed the literary world and public by storm.  He garnered a Pulitzer, a Nobel Prize, a National Book Award nomination and a high profile celebrity presence, the latter ignited in large part by his troubled, testosterone and booze-fueled lifestyle that he fictionalized in his work and embellished into myth.  But, as is evident in the riveting new six-hour documentary miniseries, Hemingway, directed by Ken Burns and Lynn Novick and scripted by Geoffrey C. Ward, the lifelong mental and physical baggage festering just below the surface of his disciplined writing career not only informed his work but ended up destroying it and him as well.

Ernest Hemingway may seem like a surprising departure for filmmakers Ken Burns, Lynn Novick and Geoffrey C. Ward who have collaborated on such lofty historical and cultural subjects as the Vietnam War, World War II, the Roosevelts, prohibition and baseball, to name a few.  But, in fact, Hemingway’s timeline, albeit relatively microscopic by Burns’ recent standards, has all the makings of a Shakespearean tragedy spanning multiple continents and an impressive array of transformative cultural, historical and socio-political milestones. 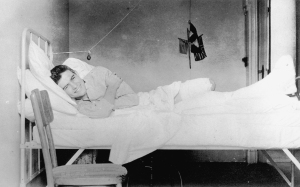 Traversing Hemingway’s 61-year life span, we thread through the Parisian ex-patriate art and literary scene of the 1920s; the gruesome battlefields of three major wars; the boudoirs of four wives and numerous mistresses; the high seas off the coast of Florida; the dive bars in Key West and Cuba; bullfighting rings in Spain; and big game hunts in Africa.  Add the upper middle class Midwestern childhood in Oak Park, Illinois, that unfolded idyllically at the turn of the 20th century, then turned sour, imprinting Hemingway’s facility for writing and fascination with pursuits that drew a flimsy line between life and death.

This is heady stuff.  Notable literary scholars, critics and authors provide ample commentary about Hemingway’s oeuvre and the lifestyle that informed it.  Actor Jeff Daniels initially seems an odd choice to voice passages from Hemingway’s work and unpublished correspondence.  But when we finally hear Hemingway’s actual voice via archival footage and audio clips (you’d think it would be huskier with all of his risky business, serial head injuries and heavy drinking), it’s clear that Daniels’ Midwestern twang was well cast.

Ernest Hemingway and his first wife, Hadley Richardson, in Chamby, Switzerland, circa 1922.

“The effect upon women is such that they want to go right out and get him and bring him home…stuffed,” said Dorothy Parker.

Much of the film series is driven by Hemingway’s women… the ones that got away and the ones that didn’t and wish they had.  His four wives are major players… two of whom (Hadley Richardson and Pauline Pfeiffer) bit the dust when someone more alluring came along; one of whom (Martha Gellhorn) dared call it quits on her own; and his fourth and final wife, Mary Welsh, who stuck by him at the end of his life when he was at his most mentally unhinged and abusive.  His controlling, self-absorbed mom, who decided that he and his slightly older sister should dress as same sex twins, seems to have planted the seeds of Hemingway’s adult predilection for switching he/she roles with his female lovers. 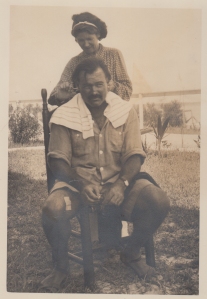 “Many women feel that Hemingway hated women and wrote adversely about them,” said Edna O’Brien. “I would ask his detractors, female or male, to read this story: Up in Michigan.  Could you in all honor say that this was a writer who didn’t understand women’s emotions and hated women?”

The exhaustively researched vintage footage and photos, passages from his work and correspondence are all wonderfully evocative.  I was especially taken with the rare clips of his pal Sylvia Beach, the proprietor of the legendary Parisian bookshop and literary hangout, Shakespeare & Company; and the many comments from 90-year-old Irish author Edna O’Brien, who touched me with her insightful and sensitive remarks about Hemingway’s work.

I also applaud the inclusion of Hemingway’s middle son Patrick Hemingway, who has some surprisingly positive things to say about his peripatetic childhood, his serial moms, and especially his dad.

Hemingway aficionados and individuals with little previous knowledge of Ernest Hemingway will find much in this miniseries to incite revisiting and reading of his work. It will be an evergreen and indispensable asset in high school and college classrooms as well.