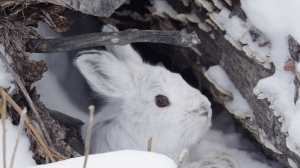 Bugs and his fictional peeps–Peter Cottontail, White Rabbit, Roger Rabbit, and the Easter bunny–are consummate people-pleasers. Who better to spend time with while we’re sidelined or sickened by the global pandemic than these celebrated, cotton-tailed bunnies with an attitude.

If, like me, you’ve enjoyed having rabbits as pets or seasonal backyard visitors, I encourage you not to miss filmmaker Susan Fleming’s latest hour-long documentary for the PBS Nature series, Remarkable Rabbits.

Nature: Remarkable Rabbits debuts on PBS tonight, Wednesday, April 8, 2020, 8:00 – 9:00 p.m. ET. (Check local listings for broadcast dates and times in your region and http://www.pbs.org/nature and Amazon Prime Video and the PBS Video app for streaming and PBS.org for DVD availability.)

While 60 minutes is hardly enough time to provide more than a brief introduction to these shy, prolific creatures…believe it or not, there are more than 100 types of domestic and wild rabbits and hares…the film does much to distinguish various species and zero in on their secret lives.

As with all films in the PBS Nature series, the camerawork is extraordinary. Rabbits and hares (their differences as newborns are quite distinctive) are resilient. Despite facing threats to their habitats and lives due to climate change, over-development and predators, they manage to thrive in a surprising range of disparate environments, from city parks and rural swamps to steamy deserts and snow-covered mountains.

Despite their name, Antelope Jackrabbits are hares not rabbits. Photo © Remarkable Rabbits Inc.

They are amazing athletes and shrewd survivalists.  Against the backdrop of the Chicago skyline, we watch the midnight mating ritual of male and female Eastern Cottontails. In the Tucson, Arizona, desert, an Antelope Jackrabbit (actually a hare), weighing more than nine pounds, standing almost two-feet high and clocking speeds up to 45 m.p.h., attempts to outmaneuver a pack of Harris hawks. And an adorable Snowshoe Hare, with some surprising survivalist tricks up its sleeve, blends in with the frozen Canadian Yukon landscape to dodge the advances of a hungry lynx.

Despite their remarkable ability to reproduce, many wild rabbits face eradication, while their domestic counterparts, if accidentally or deliberately released in the wild, are in danger of overrunning residential neighborhoods. Other domesticated rabbits are bred, primped and promoted for show. 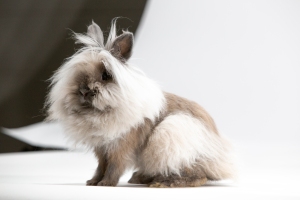 We meet biologists, a paleontologist and wildlife professionals intent on breeding and returning near extinct species to their original habitats, as well as a surprising number of rabbit enthusiasts who descend upon the American Rabbit Breeders Association (ARBA) rabbit show determined to win “Best in Breed”and the penultimate trophy for “Best in Show” for their coiffed and coddled contestants. Forty-nine breeds compete for the coveted prize of “Best in Show.”

I am one of those lucky kids, raised in the 1950’s, who received a tiny pure white, pink-eyed (Albino) rabbit one year for Easter.  Adorable little Frisky grew very big very fast, and cuddling was eventually out of the question.  She thankfully lived a long life in an elevated coup and run built in the backyard especially for her by my dad.  Today, she would be a spoiled house pet… an unheard of arrangement in those days.

This episode in the award-winning PBS series, NATURE, is not only a timely programmer for Easter week but also a fascinating evergreen introduction to an animal that is often taken for granted in the wild and overshadowed by cats and dogs in the home.  Written, produced and directed by Susan Fleming and executive produced by Fred Kaufman, the documentary is a Production of Remarkable Rabbits Inc. in association with THIRTEEN PRODUCTIONS LLC, the Canadian Broadcasting Corporation and Terra Mater Factual Studios for WNET.

2 Responses to Remarkable Rabbits Are Hopping on PBS Nature