Buckle Up for Saudi Women’s Driving School on HBO 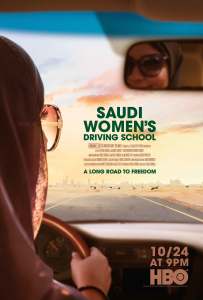 “I am used to sitting behind the driver in the back seat.”—Sarah Saleh.

Sarah Saleh spent 10 years working the phones in the back office of a Saudi car dealership in the capital city of Riyadh. Now she’s posted out front in the showroom, greeting customers and making deals as a saleswoman. Her clientele?  Saudi women, just like herself, whose dreams of obtaining a license, buying a car and driving legally in Saudi Arabia have finally come true.

Gender equality has always been a slippery slope in Saudi Arabia. Brave Saudi women have been jailed and denounced as traitors if caught driving or protesting the female driving ban, the only such ban in the world. Others continue to be jailed for questioning the choke hold placed upon their lives by the time-honored dictates of male guardianship. The tide turned in September 2017 when Saudi King Salman announced that he would lift the ban on female drivers to take effect in June 2018. The back story and repercussions of this monumental “royal decree” are beautifully explored in Saudi Women’s Driving School, an hour-long documentary by director Erica Gornall, who somehow managed to bypass long-standing Saudi restrictions on foreign filmmakers and gain unprecedented access to her subjects at home, at work and on the road. 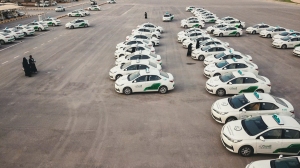 Rarely has the refrain “less is more” been better realized than in Saudi Women’s Driving School. In a mere 60 minutes, the film paints an engrossing, clear-eyed picture of the challenges faced historically by Saudi women and the ways its resilient and highly educated female population attempt to circumvent and resolve the challenges they have faced in their misogynist society, including those incited by their license to drive.

The film interweaves its title focus on the world’s largest driving school (700 instructors and 250 cars situated on a massive, state-of-the-art campus) with the story of three articulate young Saudi women whose drivers’ licenses have opened doors they never could have imagined.

New car saleswoman Sarah Saleh sets her sights on owning a Ford Taurus as she nervously takes her first driving lesson, masters tricky roundabouts and tests to become a fully licensed driver.  We drive along with Uber driver Shahad al-Humaizi as she squires male patrons to their destinations, all the while plying them with pointed questions about their acceptance of female Uber drivers.  And feisty young engineering student and part-time race car driver Amjad Al-Amri recalls her lifelong dream to race, her passion to compete and goal to win a world championship. 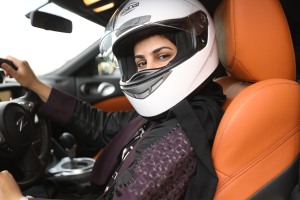 It would seem, by most standards, that these young women, as legal new drivers, have realistic, easily achievable goals. Not so and not quite yet, clarifies historian Madawi al-Rasheed, who shines a light on the basic freedoms we all take for granted that are still not shared by Saudi women in their autocratic, patriarchal culture.  The driving ban is just the tip of the iceberg that young Saudi women are clearly eager to melt.

I encourage you to watch Saudi Women’s Driving School not only as a reminder of how much we, as Americans, have to be thankful for, but also as an incentive to acknowledge the brave women who fought historically for suffrage and reproductive rights and against slavery on our shores, and those women who continue to fight the good fight internationally against political, racial and sexual tyranny, as well as environmental decimation.