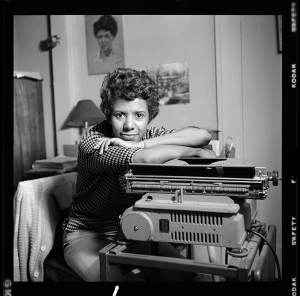 “We had her voice for as long as we really needed it, if we were wise enough to listen.”

The two-hour documentary written and directed by Tracy Heather Strain and featuring the voice of Tony Award winner Anika Noni Rose as Hansberry launches Season 32 of American Masters on PBS tonight, Friday, January 19, 2018, at 9:00 p.m. ET/8:00 p.m. CT. Check local listings for air times and repeat broadcasts in your region and   http://www.pbs.org/americanmasters for online viewing and additional resources immediately after its broadcast premiere.

The youngest child of a successful Chicago real estate broker and a school teacher, Lorraine Hansberry was driven to write and, with her writing, empower African-American, feminist, and lesbian communities to rise up against discrimination. Her father, Carl Hansberry, a respected civic leader and supporter of the NAACP and Urban League, brokered housing for African-Americans migrating mid-century to Chicago from the South. But despite his respected niche in the community, Carl Hansberry couldn’t surmount the racism that threatened his own upwardly mobile family when they moved into a  restricted white neighborhood.

Influenced by her father’s fight for racial harmony and justice, Lorraine Hansberry interacted with families in her dad’s housing projects and faced her own challenges with the ongoing racist verbal and physical threats that clouded the promise of a better day for her family and all African-Americans.

The lessons learned from her parents and their neighbors in Chicago’s African-American community would resurface on the page in Hansberry’s landmark play, A Raisin in the Sun, written when she was only 26. The story of a hard-working African-American family living in the projects on Chicago’s South Side, whose matriarch hopes to use her deceased husband’s life insurance payout to buy a new home for the family in a better Chicago suburb, A Raisin in the Sun was published and performed for the first time in 1959.

With the success of A Raisin in the Sun, Lorraine Hansberry became the  first female African-American playwright to have her work performed on Broadway. The play went on to win the coveted New York Drama Critic’s Circle Award for Best American Play in 1959. But it’s made clear in Lorraine Hansberry: Sighted Eyes/Feeling Heart that the play’s evolution from page to stage was a tough mountain to climb. 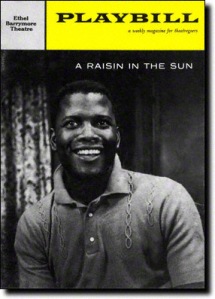 The roadblocks facing Raisin’s predominantly all-black cast, its direction by an African-American (Lloyd Richards), its dicey out-of-town tryouts with white audiences, its struggle to secure funding and a house on Broadway, and its landmark opening night on March 11, 1959 are detailed at length in the film, as is the play’s transition onto movie screens in 1961.

A scene from the first Broadway production of A RAISIN IN THE SON. From left: Ruby Dee (Ruth Younger); Lena Younger (Claudia McNeil); Glynn Turman (Travis Younger); Sidney Poitier (Walter Younger); and John Fielder (Karl Lindner). All except Turman reprised their roles in the 1961 film version.

The film’s title derives from Hansberry’s dictum that “one cannot live with sighted eyes and feeling heart and not know or react to the miseries which afflict the world.” Had she lived longer, Lorraine Hansberry would have been a powerful voice of change throughout the latter half of the 20th century and into the 21st. She no doubt would have been enraged by the degree of right-wing extremism, racism and sexism upending America today.

American Masters–Lorraine Hansberry: Sighted Eyes/Feeling Heart reminds us to revisit and embrace Hansberry’s work as we approach Black History month (February 2018). And going forward, the film will be an especially timely and evergreen program choice in African-American and women’s studies in schools, libraries and universities. It’s part of American Masters’ year-long #InspiringWomanPBS online campaign, which includes podcasts and a Web series now streaming on pbs.org/inspiringwoman, YouTube and Facebook where people can share stories of inspirational women in their own lives.