Nature Spotlights The Story of Cats on PBS 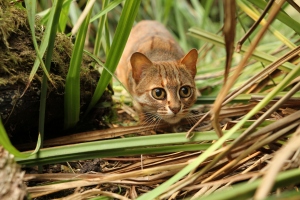 A Rusty Spotted cat doing what comes naturally, as seen in NATURE: THE STORY OF CATS on PBS. Photo: Ruth Campbell/©Plimsoll Productions.

If you’ve ever shared your home or heart with a cat, you probably agree that cats are inscrutable.  But, let’s face it, you love them anyway… and you never ever give up hope that they’ll love you back. Whether you harbor one or more felines in your home or you admire them from afar–at a safe distance through the magic of those adorable YouTube videos–I urge you to watch The Story of Cats.  This informative, two-part PBS series will definitely elevate your understanding and respect for Fluffy and Felix and for their continually evolving extended family.

With 37 species currently in play, cats are “the greatest predators since dinosaurs.” Despite facing extreme feeding challenges as “solitary” predators, they began their journey to your doorstep 11 million years ago in the rain forests of Southeast Asia. The series traces their extraordinary evolution through the ages as they adapted physiologically to planetary cataclysms, extreme temperature changes, shifting altitudes and exploding land masses.

I guarantee that even if you’ve never domesticated a cat before but are intrigued by cats in the wild, you will gain insights into the behavior and physiology of various extraordinary feline species around the world from The Story of Cats. Their feet and claws, eyes and ears, fur and tails all have an important role to play in their daily survival as solo predators; and those features impact your domesticated house cat as well. 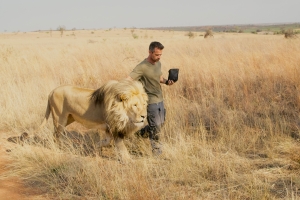 Animal Behaviorist Kevin Richardson discusses his remarkable bonding rituals with a pride of lions in the Kevin Richardson Sanctuary in South Africa. As seen in NATURE: THE STORY OF CATS. Photo: Anwar Mamon/©Plimsoll Productions.

The Story of Cats sets the stage with an introduction to the ancient Clouded Leopards, currently diminished in numbers and protected in Southeast Asia. They carry the genetic blueprint shared by all cats living today.

Of all the many fascinating feline backstories explored in the series,  I was especially taken with the films’ coverage of the origins of their elevated role in ancient Egypt; the surprisingly atypical social lives of African lions; the proliferation of Mountain lions in the hills above Los Angeles; and, with a nod to Fido, the parallel evolution of the felines’ nemesis… our canine companions.

Based on T.S. Eliot’s Old Possum’s Book of Practical Cats, the Tony Award-winning musical, Cats, is now experiencing a revival on Broadway.

If that’s as close as you thought you might want to get to cats, I recommend that you also take a look at Nature’s impressive new series, The Story of Cats. Perhaps it will encourage you to give cat lovers a pass or even adopt your very own Fluffy or Felix.

Directed by Anwar Mamon, The Story of Cats is a production of Plimsoll Productions and THIRTEEN PRODUCTIONS LLC for WNET.  It premieres on the PBS series, Nature, in two, hour-long time slots.  Episode One, Asia to Africa, debuts tonight, Wednesday, November 2, 2016, 8:00 – 9:00 p.m. ET.  Episode Two, Into the Americas, debuts next week on Wednesday, November 9, 2016, 8:00 – 9:00 p.m. ET. (Check local listings for air times and repeat broadcasts in your region. ) The series is also available on DVD and Blu-Ray from http://www.pbs.org –Judith Trojan

Judith Trojan is an Award-winning journalist who has written and edited several thousand film and TV reviews and celebrity profiles.
View all posts by Judith Trojan →
This entry was posted in Theater, TV and tagged Animals, Anwar Mamon, Cats, Cats The Musical, Kevin Richardson Sanctuary, NATURE, Nature & Wildlife, The Story of Cats. Bookmark the permalink.

2 Responses to Nature Spotlights The Story of Cats on PBS