Listen To Me Marlon a Must See on Showtime

One of the best films of 2015 debuts on Showtime tonight at 9:00 p.m., and I urge you not to miss it. It will be aired in repeat broadcasts in the weeks ahead, so check your Showtime listings and On Demand as well.

Listen To Me Marlon is quite simply an extraordinary, mind-bending profile of Oscar®-winning actor/activist Marlon Brando, written, directed and edited by noted British documentarian Stevan Riley and produced by John Battsek for Showtime. The documentary had a brief theatrical release last summer, where and when I caught it for the first time. A second screening for this review only confirmed my original opinion that the film sits without question alongside the most innovative and outstanding work of Ken Burns, Fred Wiseman, the Maysles bros., Errol Morris, Andrew Jarecki, Michael Apted, Bill Jersey, Perry Miller Adato and D. A. Penneybaker, among the mighty few who have dared to re-imagine the nonfiction biographic film. 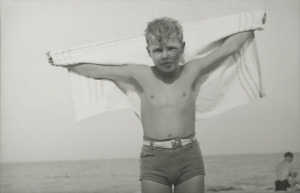 Even as a youngster, Marlon Brando had a flair for the dramatic gesture. Photo courtesy Brando Estate/SHOWTIME.

Without a doubt, Listen to Me Marlon benefits greatly from Stevan Riley’s access to more than 200 hours of Brando’s own intimately recorded audio recordings. Brando apparently earmarked this material for a future film of his own. He was determined to set the public record straight about the myths that defined and defiled him during his mercurial acting career, personal life and political activism.

Brando’s audio reflections on his life and career at all stages drive the film as its voice over narration–from his troubled childhood in Nebraska and his meteoric rise to super stardom on the New York stage and in Hollywood to his volatile relationships with women, his passion for Tahiti and his slide into morbid obesity and obscurity. It’s clear after watching and listening to the story that unfolds from Brando’s perspective in Listen To Me Marlon that he was an extremely intelligent, sensitive, thoughtful and poetic soul who struggled often unsuccessfully to justify his higher purpose and existence on this planet. 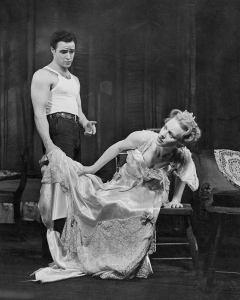 Marlon Brando, with Jessica Tandy, in his breakthrough Broadway performance in Tennessee Williams’ “A Streetcar Named Desire,” circa 1947. Photo: CORBIS/SHOWTIME.

A hypercritical, physically abusive father and a creative, irresponsible alcoholic mother laid the groundwork for Brando’s struggles with authority and women throughout his life.  When we hear late in the audio that he spent years in psychoanalysis, it’s clear that despite his ultimate vilification of the science and its practitioners, the therapy had a profound effect on the way he processed his life experiences and recalled them on the audiotapes.

Particularly fascinating are Brando’s memories of his studies and close friendship with noted drama coach and actress Stella Adler, who is seen here in rare film clips espousing her philosophy on the art of acting.  His analyses of his notable stage and film performances and the challenges those roles presented provide invaluable and evergreen insights for seasoned and budding actors, stage and film directors and students of the cinema and theatre.

As Brando’s musings approach the final moments of Listen To Me Marlon, it’s clear how, when and why his youthful excitement over his early career success faded into cynicism, disillusionment with fame and disgust for Hollywood’s artless passion for the almighty buck.  So, in addition to clips from his best work, there are clips and stills highlighting the problematic films he slogged through later in life when he devoted most of his time to more noble pursuits, like the Civil Rights and anti-Vietnam war movements and his fight to right the wrongs inflicted on Native Americans.

“Everybody feels like a failure.  Everybody feels like they coulda been a contender,” says Brando in Listen To Me Marlon, referencing the iconic line from his Oscar®-winning performance in On the Waterfront (1954).  Had he not been an actor, Brando says he probably would have been a con man, which he admits would not be too far afield from being an actor.  Instead, I think, he could have been a profoundly influential drama teacher and acting coach, or even a counselor/therapist for creatives via the meditative arts.

Listen To Me Marlon breaks new ground in the crowded universe of documentary film profiles. Kudos to filmmaker Stevan Riley and producer John Battsek for this superbly edited, insightful assemblage of rare audio and visual archival materials…for making sense of an extraordinary, conflicted artist’s life story, from beginning to end…on the record.  Don’t miss it!