Walt Disney always reminded me of my childhood pediatrician. And that was a very good thing. Not only did they look alike, but both men were, in fact, passionate healers who never lost their ability to speak to the needs of children… and “the child” within the older folks who raised them.  One man greeted me every Sunday night from my TV screen; the other stopped by regularly to cure what ailed me.

To me, my parents and the rest of his patients, my doctor was a saint.  In a larger playing field, Walt Disney was a creative genius whose body of work made us all feel really good.  My doctor effortlessly removed my tonsils in his office and alleviated my measles’ scare.  Walt Disney gave me Snow White, Pinocchio, Cinderella, Bambi, Davy Crockett, Mary Poppins, Hayley Mills and The Mickey Mouse Club. I had a charmed, healthy childhood thanks to those two men.

I think you’ll find yourself thinking a lot about your past and, most especially, some joyful moments of your childhood as you watch the ambitious, two-part, four-hour biography of Walt Disney, produced and directed by Sarah Colt, premiering on the American Experience PBS series.  Part One debuts tonight, Monday, September 14, 2015, 9:00-11:00 p.m. ET.  Part Two follows on Tuesday, September 15, 2015, 9:00-11:00 p.m. ET. (Check local listings for air times in your region.)

The first two hours of Walt Disney cover Disney’s critically formative early years (1901-1941). Seemingly driven to rewrite the story of his unhappy Midwestern childhood–his domineering dad’s string of business failures continually uprooted the family–Disney channeled his psychological wounds and considerable artistic talent into a career in the nascent movie industry. As is the case with most visionaries, timing is everything; and for Walt Disney, the time was right for his all-consuming passion: Animation.

Animation was a growth industry, a genre primed for the enormous innovative, entrepreneurial skills that Disney brought to the table. With his brother Roy as his financial advisor and a team of dedicated, talented artists by his side, Disney planted and grew a lucrative niche in Hollywood. By 1928, the Disney Brothers Studio premiered Steamboat Willie, and a star named Mickey (Walt’s “alter ego”) was born.

Part One of Walt Disney draws an absorbing portrait of a man who had an instinctive understanding of his audience and a knack for building a brand, decades before “branding” became a buzzword. The film provides a fascinating look at his tenacious efforts to film and release Snow White and the Seven Dwarfs (1937) as the first ever feature-length, story-driven animation. Despite his naysayers and obsessive attention to detail that slowed production to a crawl, Snow White was an immediate critical and box office hit that grossed $8 million during its first year (that’s more than $100 million today!).  Clips from Snow White and other classics produced during this period, including the initially less successful Pinocchio (1940) and Fantasia (1940) are plentiful, as are vintage behind-the-scenes film clips, home movies and on-camera analyses by various film scholars, critics and cultural pundits. 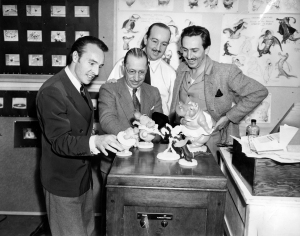 But there was trouble brewing in paradise. Labor unrest and union organizing threatened to derail Walt’s career trajectory and his new studio in Burbank. Part Two (1941-1966) chronicles the arc of betrayal and mistrust that apparently transformed Walt from Mr. Nice Guy into a grudge-carrying, “friendly witness” during the HUAC hearings in 1947.

To escape the turmoil, Walt focused his attention and “better angels” instead on a seemingly frivolous personal pursuit: building and commandeering his own scale-model railroad. And, of course, that child friendly railroad eventually compelled him to design and build a “community” around it.  It would be called Disneyland.

Part Two is a breathtaking and often touching look at how Walt delved into new film genres (nature films, live-action comedies and live-action/animation hybrids) and markets to keep his brand fresh and financially viable.  He even managed to secure a deal with ABC-TV to fund the building of Disneyland. That back story is riveting, as is the film footage that records and tracks the evolution of Disneyland from landfill to monumental opening day. Walt Disney, a lifelong chain-smoker, died tragically from lung cancer at age 65 with plans underway for yet another new dream “community,” this time in Florida, to be called EPCOT.

Walt Disney (standing far left) and some of his animators, circa 1931. Photo courtesy David Lesjak.

The glorious film clips, vintage behind-the-scenes footage, home movies and recollections from various old-timers who knew and worked with Walt as animators; designers; ink and painters; and composers; including his son-in-law, producer Ron Miller, provide welcome insight into Walt’s psyche, creative endeavors and executive temperament. However, the pompous rhetoric posited by the film’s resident cultural “scholars” often stops the film dead in its tracks.

If you’re a Baby Boomer, the timeline and psychology behind Walt Disney’s impact on your life is quite simple. You remember exactly how Disney films and TV shows and the promise of visiting Disneyland fit into your life.  You remember where you were when you first were frightened by the Evil Queen in Snow White, cried during Bambi, held your breath when the clock struck 12 in Cinderella or danced down the street after watching Mary Poppins.  You remember how excited you were to buy Davy Crockett coonskin caps or how you never missed an episode of The Mickey Mouse Club.  You remember how good all of those moments made you feel and why. 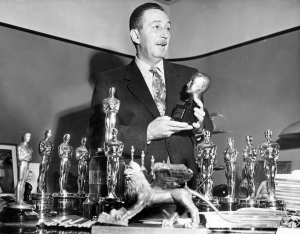 And so, like me, you’ll probably want the “experts” who drain the energy out of the documentary with their windy psycho-babble–about Walt’s feelings at any given moment, his so-called demons and the cultural context of our Baby Boom generation–to just put a sock in it. Call me Grumpy, but one of these particularly self-important blowhards–a young, female cultural historian with insignificant film history creds–should have landed more often than not on the cutting-room floor.