American Experience Shines a Light on the NYC Blackout of 1977 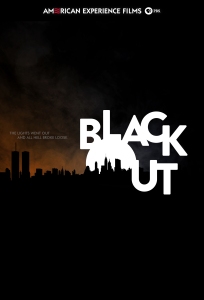 Thirty-eight years ago, on July 13, 1977, New York metro area residents were sweating through a scorcher. New York City was on the brink of bankruptcy: Cops and firefighters and hundreds of city workers faced layoffs, afterschool services were being cut, residents and commuters lived in fear of squeegee men and a serial killer dubbed the “Son of Sam.” City streets, sidewalks, walls and subway cars were littered with garbage and graffiti.  In short, the city was a mess.

Fuses were short and about to blow… in more ways than one.  And blow they did, literally, during a severe thunderstorm that evening. Lightening struck a power line in Westchester County (NY) spurring a cascading series of power outages, some of which were mishandled by Con Edison engineers as they futilely attempted to short-circuit a total meltdown in their antiquated system.  They failed and the lights went out, leaving seven million city dwellers in the dark  and without electricity for 25 hours.

The NYC skyline as seen from Queens during the power blackout of 1977. Lights glowed from a midtown waterside Con Ed plant as traffic passed on East Side Drive. Photo: Dan Farrell/NY Daily News via Getty Images.

People dined under the stars on Upper East Side rooftops, partied in the streets and at tony watering holes where bartenders offered free champagne. In the dark and in short supply were Good Samaritans who helped direct traffic, mend wounds, put out fires and short- circuit looters.

In disadvantaged neighborhoods downtown, uptown and in the boroughs, residents were fed up with being forgotten. Lawlessness ensued as storefronts were smashed and merchandise stolen.

People flooded hospital emergency rooms, bloodied from broken glass and with limbs fractured from dragging heavy refrigerators, bulky TV consoles and other large appliances through the streets and up flights of stairs to their flats.  Others suffered from smoke inhalation, burns or worse from the more than 1,000 fires choking the streets. When the power was restored and the smoke finally cleared, 3,700 people had been arrested for looting more than 1,600 businesses.

Trophies by Syl in Brooklyn was looted on July 13, 1977. In AMERICAN EXPERIENCE: BLACKOUT, the shop’s longtime co-owner, Elzora Williamson, recalls the devastation that she and her husband, Syl, faced. Photo courtesy Elzora Williamson.

Locals who lived through this mayhem share their recollections of the blackout of ’77, including a firefighter; a cop; reporters; a medical student who volunteered in a darkened, under-staffed hospital emergency room; a steward who served wine at the famed Windows on the World restaurant on the 107th floor of One World Trade Center; neighborhood shop owners who were set upon by criminals, as well as their looting friends and neighbors; and two Con Edison System Operators who had their hands on the switch on that fateful day.  More than one of these survivors compare the 1977 meltdown to its kinder, gentler predecessor:  the blackout that affected the entire Northeast and parts of Canada on November 9, 1965.

Directed by Callie T. Wiser, American Experience: Blackout meshes her engaging witnesses with murky, chaotic footage taken on the streets and indoors during the 1977 blackout. An original music score by Gary Lionelli effectively underscores the drama of this inglorious period in New York City history.  Watch it tonight, Tuesday, July 14, 2015, 9:00-10:00 p.m. ET on PBS (Check local listings for air dates in your region).   It will make you feel good about how far we’ve come…or have we? –Judith Trojan

Judith Trojan is an Award-winning journalist who has written and edited more than 1,000 film and TV reviews and celebrity profiles.
View all posts by Judith Trojan →
This entry was posted in TV and tagged American Experience: Blackout, Callie T. Wiser, Gary Lionelli, New York City, PBS, Power Outage, The Blackout of 1977, Urban Blight, Vandalism, Windows on the World. Bookmark the permalink.