The Lion’s Mouth Opens on HBO 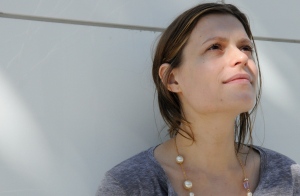 In THE LION’S MOUTH OPENS, actress/filmmaker Marianna Palka takes us on her personal journey to discover if she’s inherited Huntington’s Disease from her father. Photo: Moet Hashimoto. Courtesy HBO.

For many of us, May is a month rife with promise and new beginnings… trees and flowers are blossoming; days are brighter and longer; nights are balmy. Summer beckons.  If your only problem so far this year was sneezing and coughing through May’s stepped-up allergy season, then you are truly blessed.

May is also Huntington’s Disease Awareness Month.  This degenerative brain disorder is passed on through families genetically.  It is so far incurable and traps individuals in the prime of life with progressive mental and physical disabilities that are almost beyond comprehension. Legendary folk singer Woody Guthrie is probably the most notable celebrity victim of the disease. His son, folk singer Arlo Guthrie, dodged the genetic legacy of his dad.  But 32-year-old Scottish actress/filmmaker Marianna Palka may not be so lucky.  Her dad and his mother died of the disease. Marianna’s sister and cousin carry the gene mutation as well.

The Lion’s Mouth Opens, a 30-minute documentary co-produced by Ms. Palka, debuts tonight, Monday, June 1, 2015, on HBO (9:00 – 9:30 p.m. ET/PT) in the shadow of Huntington’s Disease Awareness Month. The film tracks the aftermath of Ms. Palka’s decision to be tested for the gene mutation.  The film’s title originated in a 1963 poem written by Bob Dylan for his muse, Woody Guthrie.

The statistics reported in this moving film by Oscar® and Emmy-nominated director Lucy Walker are quite staggering: Approximately “30, 000 Americans have been diagnosed with Huntington’s Disease, and 200,000 others, whose parents were diagnosed, have a 50/50 chance of developing it.  Less than 10% of those at-risk choose to take the genetic test.”

Ms. Palka shares memories and home movies of her dad’s life and decline–she was only eight years old when he became symptomatic.  Her mom, the love of his life, describes what it was like to watch their idyllic life crumble. Also interspersed at one point are clips (difficult to watch, albeit brief) of others afflicted with the disease.

As her friends–including her former boyfriend, actor Jason Ritter, and actress Bryce Dallas Howard–gather around her for support, Ms. Palka explores her reasons for taking the test, and her hopes and fears for the future. Ms. Dallas Howard and another friend then accompany her to the hospital to find out the results.  I assure you, there won’t be a dry eye in the house during this touching climax. 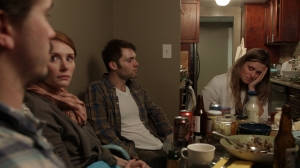 An audience and critical favorite on the film festival circuit, The Lion’s Mouth Opens debuts on HBO tonight, June 1, 2015, 9:00 – 9:30 p.m. ET/PT. (Check listings for additional HBO playdates throughout June, as well as availability via HBO On Demand and HBO Go.) Going forward, it will be a welcome discussion catalyst in university, medical and family counseling sessions dealing with Huntington’s and other genetic disorders. For more information on HD, check out the Web site of the Huntington’s Disease Society of America at http://hdsa.org/  –Judith Trojan