Ripley Believe It or Not Is Stranger Than Fiction

As 2014 drew to a close, “believe it or not” seemed to best describe

the mentality of those at Sony who thought that a “frat boy comedy” about the assassination of a sitting head of state was a good idea.  Now, as we look past the regrets and what remains of Sony, I recommend that you make better use of your valuable time by watching Ripley: Believe It or Not, an entertaining documentary debuting tonight on the PBS series American Experience that explores the provenance of the phrase “believe it or not” in the life of the unlikely multimedia visionary who branded it.  (Tuesday, January 6, 2015, 9:00-10:00 p.m. ET. Check local listings for broadcast times in your region, and see below for streaming and DVD availability and updates.)

He was a buck-toothed, stuttering skinny kid from Santa Rosa, California, who at first glance or second seemed to have nothing going for him.  But LeRoy Robert Ripley, born in 1890 on the cusp of the 20th century, did possess at least three important skill sets that would transform his life and that of popular entertainment in the early to mid-20th century and beyond.

Ripley loved to draw and had an affinity for cartoons, a talent

he parlayed into a successful career at a young age as a sports cartoonist at The Globe in New York City. He had an insatiable interest in the world around him, especially exotic cultures and offbeat lifestyles.  And he had the remarkable ability, despite his awkward shyness and stiff camera and radio presence, to continually push the envelope and venture into the latest and most lucrative media venues.

“Ripley’s Believe It or Not!” column originated in 1918 during his stint on The Globe, and quickly caught the eye of Richard L. Simon and Max Schuster and publishing mogul William Randolph Hearst, who grew Ripley’s visibility with book and syndication deals and all-expenses paid world travels during which he expanded his popular sports coverage to include illustrated reports on the unusual habits and habitats of the locals he met on his journeys.

Ripley introduced his quirky finds and adventures to the American public in print as well as in the movies, at the Chicago World’s Fair and in a permanent “museum” on Broadway in New York City. His phenomenal success in those markets led to a much ballyhooed stint on the radio and the launch of his own TV show in 1949 on NBC, also home to every Baby Boomer’s hero Howdy Doody.

Remarkably, Ripley’s physical appearance and wardrobe (his buck teeth were shaded by the rim of his pith helmet) and fear of flying never dampened his allure as a ladies man and world traveller.  He amassed legions of fans and a fortune. He became a millionaire during the Depression, and his lavish lifestyle assured his status as a front page newsmaker.

In Ripley: Believe It or Not, filmmaker Cathleen O’Connell provides a polished, concise narrative that calls to mind the early, hour-long work of Ken Burns. O’Connell incorporates wonderful black and white and color archival footage and photos documenting Ripley’s milieu, travels and exotica. (However, some of his later stars–the guy who eats a live mouse and others who tempt fate with blowtorches and forks on camera–are a bit hard to watch in living color). The examples of Ripley’s sophisticated cartoons are especially eye-popping.

Robert Ripley’s first Odditorium was visited by two million people at the Century of Progress World’s Fair in Chicago 1933-34, and set the stage for six more such exhibits during his lifetime. Photo courtesy Ripley Entertainment Inc.

Input from Ripley historians and colleagues is also informative and confirms that the “King of Curiosities” had a heart and social conscience. His fascination with offbeat individuals and locales was born of a need to celebrate the underdog and not by an obsession with the denizens of freak shows or circus sideshows. Ripley’s empathy was driven by his lonely childhood endured as a homely hayseed who was virtually invisible to his peers.

His early newspaper cartoon coverage of amazing feats of sportsmanship and his late-in-life focus on World War II heroics and the post-war Atomic bomb devastation in his beloved Far East shined a light on those (soldiers and civilians) whom he felt deserved not to be forgotten. 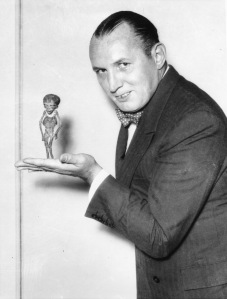 Robert Ripley, circa 1933, with “Atta Boy,” a mummified baby found in Bolivia and believed to have been shrunken by the Shuar Indians of Ecuador. Photo courtesy Ripley Entertainment Inc.

American Experience–Ripley: Believe It or Not is an entertaining introduction to a surprisingly gutsy guy who made it big without good looks but with a nose for fringe dwellers and new technology. That his quirky sensibility continues to live on today, saturating social media, especially YouTube, and such broadcast TV and cable shows as America’s Got Talent, Duck Dynasty and Extreme Homes, to name but a few, is an indication of Ripley’s legacy as a visionary showman.

American Experience–Ripley: Believe It or Not debuts on PBS tonight, January 6, 2015, 9:00-10:00 p.m. ET. Check local listings for air times in your region, streaming and DVD availability via Amazon Prime Video and DVD also from shopPBS.org  Going forward, touch base with http://www.pbs.org/wgbh/americanexperience/ for streaming updates.

Judith Trojan is an Award-winning journalist who has written and edited several thousand film and TV reviews and celebrity profiles.
View all posts by Judith Trojan →
This entry was posted in Film, Radio, TV and tagged America's Got Talent, American Experience: Ripley Believe It or Nor, American Experience: War of the Worlds, Cartoons and Cartoonists, Cathleen O'Connell, Ken Burns, LeRoy Robert Ripley, Odditorium, PBS, Ripley's Believe It or Not!, Simon & Schuster. Bookmark the permalink.