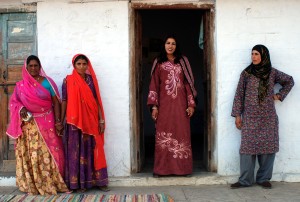 Women from impoverished rural communities around the world are featured in SOLAR MAMAS as they travel to India to study solar engineering at Barefoot College. (Independent Lens/PBS)

As we approach the pivotal outcome of a Presidential election that could dramatically alter the future of women’s rights in this country, especially with regard to abortion, contraception and general health care, please take the time to revisit the candidates’ platforms on these issues, as well as their stance on empowerment through education and the importance of utilizing new technologies and energy resources.

It’s of vital importance to understand the damaging effect of curtailing educational initiatives in low income and inner city communities and impeding the rights of women (healthcare and otherwise). If you think these issues do not and will not seriously impact the lives and rights of women and men, of all ages, on all levels of the socio-economic spectrum, think again.

Solar Mamas, a timely new film directed by Jehane Noujaim and Mona Eldaief debuting tonight on Independent Lens, follows 30-year-old Rafea, a Jordanian mother of four, who is recruited by India’s Barefoot College to train to be a solar engineer. To accomplish her goals, she and another local recruit must leave their families and village for the first time and study how to use technology to harness solar energy to make themselves self-reliant and their communities sustainable.

Since their culture forbids the education of girls beyond the age of 10, women in Rafea’s village have no other purpose than to bear and raise children, cook and clean (Rafea and her children live in a tent and barely survive) and serve their husbands who apparently are allowed to procreate at will with more than one woman. Rafea’s husband lives with his first wife and family and rarely stops by. He’s unemployed, aimless and balks at her ambition to better herself and their community by attending college. He ignores their four children for the most part which forces her to return home from India prematurely to care for an ailing child.

Angry and unfulfilled, Rafea argues her case in front of village elders and her parents (her mom advises her to stay home with her children, while her dad seems to support her desire to travel and learn new things). With the intervention of a supportive local environmental Minister, she concedes “control” to her husband by accepting his threats to leave her and take their children. Although she remains fearful that he will do so, she returns to India and Barefoot College where she is warmly welcomed and reintegrated with fellow classmates from Guatemala, Kenya, Burkina Faso and Colombia.

When their six-month training ends, Rafea returns home again, this time revitalized with the skills and passion to develop a solar power training program in her village. Her beaming face quickly darkens as male villagers attempt to marginalize her and run the program themselves. But she prevails; and in the end, despite a new pregnancy, she is employed, empowered and living with her children in their very first house.

Solar Mamas is part of the international WHY POVERTY? Project, a cross media event reaching more than 500 million people around the world via more than 60 international TV broadcasters, as well as radio, internet and live events in November 2012. To learn more about Solar Mamas, visit the companion Website at http://www.pbs.org/independentlens/solar-mamas

2 Responses to Solar Mamas Light the Way on Independent Lens