Posted on September 8, 2017 by Judith Trojan 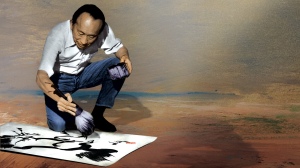 Despite suffering the indignities of racial profiling and discrimination, Chinese-American Tyrus Wong (1910-2016) persevered and created a distinguished body of work as a fine artist and designer. Photo courtesy of the Tyrus Wong family.

“Tyrus Wong’s story is a prime example of one of the many gaping holes in our society’s narrative on art, cinema and Western history,” said writer/producer/director Pamela Tom. “By telling his story, I wanted to shine a light on one of America’s unsung heroes, and raise awareness of the vital contributions he’s made to American culture.”

It’s been 75 years since the debut of Disney’s beloved animated feature Bambi. Generations of moviegoers have enjoyed and shared their tear-soaked memories of this beautiful film. But few Bambi fans (with the exception of veteran Disney insiders and historians) can identify the artist tapped by Walt Disney to shape his studio’s adaptation of Felix Salten’s 1923 novel, Bambi, a Life in the Woods. Surprisingly, you may also have enjoyed this same artist’s Hallmark Christmas card designs (one of his cards sold over one million copies); eaten off ceramic plates embellished with his artwork; ordered dinner from his handmade menus; admired his WPA murals; or been mesmerized by his whimsical kites.

In a career spanning a good portion of the 20th century and nearly a quarter of the 21st, Tyrus Wong (1910-2016) navigated a twisty road to fine-tune his talent as an artist. As a nine-year-old Chinese immigrant in 1919, he faced virulent anti-Asian bias the minute he stepped foot on Angel Island, the notorious immigrant processing station (1910-1940) in San Francisco Bay. There he endured a monthlong separation from his dad and grueling interrogation specifically designed to undermine Chinese immigrants and send them packing. Somehow, Tyrus passed the test.

Undaunted, he refused to be pigeonholed as a houseboy or laundry worker and began to fashion a life for himself in the West Coast Asian-American arts community. He first gained momentum as a young scholarship student at the Otis Art Institute in Los Angeles. Impoverished and hounded by the indignities of racial discrimination, he persisted and eventually landed jobs in Hollywood studio art departments. He built a solid 50-year marriage, raised three daughters and created a body of work that ultimately garnered the honors and exhibitions he so deserved. Although Tyrus pretty much had to wait until his 90’s to enjoy wider recognition, he lived to be 106!

In American Masters: Tyrus, filmmaker Pamela Tom showcases a generous selection of Tyrus Wong’s work in all formats, as well as vintage period footage, clips from his retrospectives and awards’ presentations and insightful commentary from Tyrus, his daughters and a host of articulate film and animation historians, critics, archivists and industry colleagues, including Oscar®-winning animator John Canemaker.

A longtime friend and former colleague of mine, John Canemaker is a full professor and executive director of Animation Studies at New York University’s Tisch School of the Arts Kanbar Institute of Film & Television, a prolific author and lecturer on the subject of animation and one of the world’s foremost Disney scholars. He generously agreed to share his memories of Tyrus Wong with me.

Judith Trojan:  What impressed you the most about Tyrus?

John Canemaker:  I first met Tyrus Wong in 1994 when I interviewed him in his home in Sunland, California, for my book on Disney concept artists, Before the Animation Begins – The Art and Lives of Disney Inspirational Sketch Artists (Hyperion, 1996).  He was a mere youngster of 84 at the time.  I was equally in awe of his talent as an artist and his positive, cheerful, indomitable vitality and resilience.

Trojan:   Pamela Tom’s film is truly an eye-opener in that it shines an important light on the shocking abuse faced by Chinese immigrants in 20th century America. It pulls no punches and is especially timely in light of the current administration’s anti-immigrant stance. Tyrus comes across as a gentle fellow who somehow managed to surmount the racist obstacles that threatened to derail his dream to support his family in America as a working artist.  How did he manage to secure a niche in Hollywood?

Canemaker:  I think it’s a case of ‘talent will out.’  Tyrus’s diverse artistic gifts could not be denied, nor could being in the right place at the right time. Throughout his life, he took full advantage of opportunities whenever they presented themselves. He made his own luck! Under his gentle exterior, he had a will of steel.

Trojan: From your perspective as a noted animation historian, Disney scholar and animator, what, in a nutshell, made him an unorthodox yet ultimately a perfect fit for Disney’s Bambi project?  How did Tyrus’s vision and unique skill set determine the overall look and feel of Bambi?

Canemaker: ‘I like the indefinite effect in the background,’ Walt Disney said of Wong’s ethereal, mysterious paintings and pastels.  Tyrus’s contribution to Bambi was unique in animated features of the period. He brought a mixture of Occidental and Asian influences, a fusion of contemplative compositional balance and limited details and restraint of traditional Chinese painting.

E.H. Gombrich once wrote that ‘The Chinese consider it childish to look for details in pictures and then compare them to the real world. They want, rather, to find in them the visible trace of the artist’s enthusiasm.’ In short, Tyrus Wong brought visual poetry to Bambi’s forest– simplicity of form, limited detailing, and vibrant color.

Canemaker:  Tyrus Wong was hired at Disney in March 1938 and was released (laid off) on Sept. 12, 1941.  Bambi was released on August 21, 1942. He did not participate in the infamous May 1941 strike at the Disney studio.  So I speculate that he was laid off because his part of pre-production– conceptual art, establishing the look of the settings, color, etc.–was over.

Interestingly, over 50 years later, in the mid-1990’s, Joe Grant, a surviving Disney veteran artist from the old days, invited Wong to rejoin the studio and participate as an inspirational sketch artist on Mulan (1998), set in ancient China. Wong declined the invitation claiming his ‘style had changed so much.’

Trojan:  Pamela Tom’s film also takes a fascinating look at the opportunities available for artists in Hollywood studio Art Departments.  Tyrus’s storyboards for notable films at Warner Brothers and elsewhere are glorious. I especially like the transitions between his pre-production storyboards and the final filmed scenes that reproduce them. Tyrus seemed to enjoy that work.

Canemaker:  He loved westerns and worked on a number of films starring John Wayne. He was up to the creative challenge of designing conceptual artworks for various genres to guide the art direction of a film.  The storyboards especially helped directors decide on camera angles and when and where to cut from one scene to another.

Trojan:  From your perspective, where does Tyrus Wong fit in the pantheon of film and animation history?

Canemaker:  He was a great cinema art director, whose work on Bambi profoundly inspired, and will continue to inspire, generations of animation filmmakers.

Trojan:  Disney’s Pixar animators seemed awestruck when they approached Tyrus, which is quite touching.  It’s wonderful that he lived long enough to be named a ‘Disney Legend’ in 2001 and enjoy retrospectives of his work within the film and fine arts community.

Canemaker:  The Walt Disney Studio’s Animation Research Library has a grand collection of original Bambi art by Tyrus Wong, as does the Walt Disney Family Museum in San Francisco, a number of private art collectors, and, of course, Tyrus Wong’s family as well. Ω

American Masters: Tyrus is not only an inspiring celebration of artist Tyrus Wong and his body of work, but it also is an important reminder of the obstacles facing immigrants–past and present–as they attempt to study, work, raise a family and realize their dreams in America. The film will be an evergreen addition to school, library, university and museum programs focusing on the immigrant experience in America, Disney animation, ethnic art and mid-20th century film history.