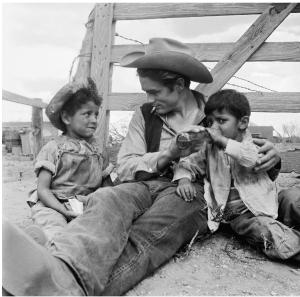 Elizabeth Taylor, Rock Hudson, James Dean, Dennis Hopper, Sal Mineo and film director George Stevens.  Through the years, it’s been hard to dodge the after-hours buzz on this stellar crew.  It’s also hard to imagine them playing second fiddle to anyone, but that’s what they do in Children of Giant, the VOCES season opener airing on PBS tonight, April 17, 2015, 10:00 – 11:30 p.m. ET (Check local listings for air dates in your region).

VOCES, Latino Public Broadcasting’s arts and culture series, turns the spotlight on the Mexican-American supporting players and townsfolk who welcomed the stars and production team to their dusty West Texas community in the summer of 1955. The Hollywood luminaries descended upon Marfa, Texas, by plane, train and automobile to film an adaptation of Edna Ferber’s controversial novel, Giant.  The film, dubbed a new kind of Western, went on to receive 10 Oscar nominations, winning George Stevens an Oscar in 1957 for Best Director. 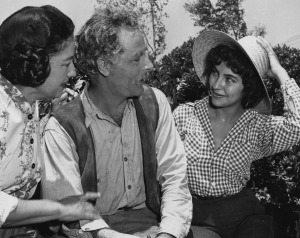 Children of Giant, directed and executive-produced by Hector Galán, recalls the impact of that pivotal summer on the lives of Marfa citizenry, most of whom were Mexican immigrants.  Many, as children, were cast as extras. Some townsfolk housed cast and crew, while others stood quietly by and watched and photographed the now-iconic sets being built and scenes being shot.

It clearly was a dazzling summer in Marfa, Texas, one that warranted a charming welcoming parade and nonstop community hoopla.  But, as is evidenced in Children of Giant, the importance of the summer of ’55 stretched beyond mere nostalgia, reflecting much more than the black and white photos and home movies of the stars shared here by current and former Marfa residents. The Ferber novel and its film adaptation dealt with racism and segregation. These were hot button issues for African-Americans in the 1950’s, but they also hit close to home in Marfa, where its Mexican-American residents, like others living throughout the Southwestern U.S., struggled to bridge the racial divide that separated them from Anglos. 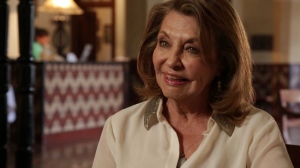 Ms. Cárdenas was born in Tijuana, Mexico, and obviously didn’t need that make-up. This jarring revelation as well as others, for better or worse, about the film’s production timeline, its casting and its relevance in the ongoing discussion of racism, feminism and immigration in America come via reflections from Ms. Cárdenas and her fellow cast member, Earl Holliman; the film’s dialogue coach, Robert Hinkle; the director’s son, George Stevens, Jr.; and various film historians and journalists.

They elaborate on Giant’s transition from book to screen, from Hollywood sound stage to rural West Texas and on to box office glory, illustrated by behind-the-scenes black and white and color photos and footage, and clips from the finished film.  Also revisiting this memorable summer are several of the former child extras and children of community leaders, all Mexican-Americans.  Now senior citizens, they share the good times and treatment they received from the director, actors and production staff during the summer of 1955.  And adding to Marfa’s immigrant mix was a German war bride, a beloved member of the film’s catering crew who also appears here as well.

Children of Giant debuts on PBS tonight, April 17, 2015, 10:00 – 11:30 p.m. ET (Check local listings for air dates in your region). It’s the season opener of the VOCES series “devoted to exploring and celebrating the rich diversity of the Latino cultural experience.” When paired with a reading of Edna Ferber’s novel and a screening of George Stevens’ classic film (now available on DVD, Netflix and On Demand, etc.), Hector Galán’s documentary, Children of Giant, is a relevant addition to the study of George Stevens’ films, especially the Ferber-Stevens’ collaboration, and will serve as an important discussion catalyst about racism, segregation, immigration and feminism in America as depicted in literature and film. –Judith Trojan