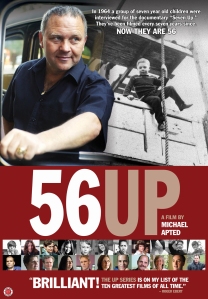 For half-a-century, ex-pat British director Michael Apted (Coal Miner’s Daughter, Gorillas in the Mist, The World Is Not Enough, The Chronicles of Narnia) has been passionately involved with the ground-breaking Granada TV project now known simply as The UP Series.  Driven by the Jesuit maxim, “Give me the child until he is seven and I will give you the man,” the documentary series debuted in 1964 focusing on 14 British seven year olds—10 boys and four girls—from diverse socio-economic backgrounds.

Fresh out of Cambridge University, Michael Apted initially joined the project as a researcher and corralled subjects who would ideally agree to be filmed again at seven-year intervals throughout their lives.  It was a concept without precedent that has since produced eight films and, for better or worse, sowed the seeds of the “reality TV” movement as we know it.

Fifty years later, the “children” are now 56 years old and, with one exception, still on board; and Apted subsequently directed the follow-up films:  7 Plus Seven, 21 UP, 28 UP, 35 UP, 42 UP, 49 UP, and the latest installment, 56 UP.  As his middle-aged subjects reflect upon their current lives since 49 UP—whether divorced, single or long married, with their children grown, their grandchildren multiplying, their dreams realized, stalled or forgotten—this is a powerful reminder that our lives, like theirs, truly matter, that our days and weeks and years add up to something that can only be called “destiny”and that opportunities of class, gender and race and the definition of “success” and “failure” are ever-changing.

With their whole lives ahead of them, seven-year-old Jackie, Lynn and Sue were featured in SEVEN UP and, in middle-age, in Michael Apted’s 56 UP. A First Run Features release.

56 UP had a critically acclaimed theatrical release in the States earlier this year and debuts tonight on PBS-TV’s POV Indies Showcase (10 p.m. ET, check local listings).  I urge anyone with an interest in the evolution of documentary filmmaking and the birth of “reality TV” to tune in.  Although previous acquaintance with the subjects would enhance your appreciation of 56 UP, Apted incorporates enough clips from the earlier films to put his subjects’ current stage of life in perspective.  For example, I can’t imagine a dry eye in the house during the moving, revelatory flashbacks that juxtapose the challenges faced by these 56 year olds with the hopes and dreams they expressed as innocent seven year olds.

The UP Series is an incredible achievement, as film and sociology, and should be required viewing in schools, universities, church and museum settings, wherever the serious study and examination of documentary filmmaking, family life and socio-economic issues can be found.—Judith Trojan

Judith Trojan is an Award-winning journalist who has written and edited more than 1,000 film and TV reviews and celebrity profiles.
View all posts by Judith Trojan →
This entry was posted in Film, TV and tagged 56 Up, Aging, Family Relationships, Michael Apted, POV, Reality TV, Seven UP, Social Issues, The Up Series. Bookmark the permalink.

7 Responses to 56 UP Debuts on PBS